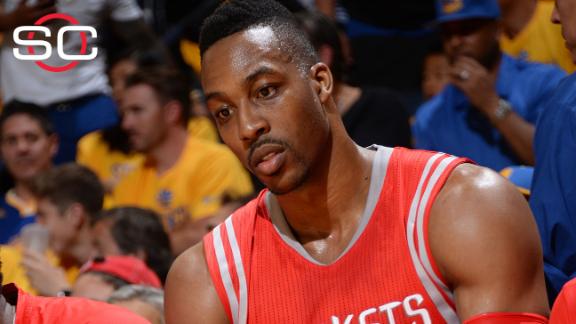 Howard underwent an MRI on Wednesday and a source said he has no structural damage.

Howard suffered the injury in the first quarter of Tuesday's110-106 loss to the Golden State Warriors. Howard finished with seven points and 13 rebounds in 26 minutes.

It was clear after he suffered the injury that Howard didn't have much lift or movement in his legs.

"It's very sore, it started during the game," Howard said after Wednesday's practice. "It's another test."

If Howard is unavailable for Game 2, rookie Clint Capela will start at center. In Game 1, Capela scored nine points and had four rebounds in 12 minutes.

It's also not the first time the Rockets have missed Howard. He nursed knee injuries throughout the season, causing him to miss 41 games, second most on the team behind Terrence Jones (49). When Howard returned late in the season he was on a minutes restriction that was lifted during the postseason.

While Howard hasn't been ruled out for Game 2, he does expect to return at some point in this series.

Howard was injured when teammate Josh Smith crashed into his leg when attempting a shot. Howard left the game to loosen up the leg by jogging in the hallway behind the court and icing it down.

"Yeah, no doubt," Howard said. "It was very painful to play last night and coach just felt like it was best that I sit out the rest of the game but there was nothing I could do."

Howard: Very painful to play Game 1
Dwight Howard talks about his left knee sprain that may keep him from playing in Game 2 against the Warriors.