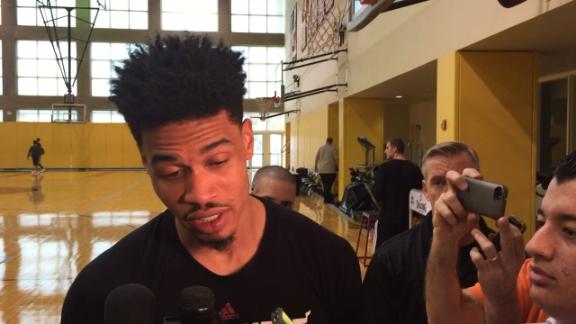 MIAMI -- Dwyane Wade and Gerald Green returned to the Miami Heat's practice Saturday after both players missed time to deal with personal matters off the court.

Wade was away from the team during Thursday's victory against the Utah Jazz to be with his youngest son, who was hospitalized with an undisclosed illness. Wade, who posted on a social media account late Thursday that 8-year-old Zion Wade was doing better, reiterated Saturday that his son's condition has improved but that he remains in a local hospital for treatment.

The Heat are in the middle of a seven-game homestand and don't play again until Tuesday against Minnesota. Wade indicated he expects to be available for upcoming games as long as his son's condition continues to improve over the next few days.

"I don't want to get into what happened, but just know that I appreciate everyone's support," Wade said after Saturday's practice at AmericanAirlines Arena. "[Zion] is not out of the woods yet, but hopefully soon he will be. Right now, it's just about seeing a progression every day."

The Heat were off Friday, so Saturday was the first time the team was together since Thursday night. Wade spent time after Saturday's practice meeting briefly with Heat owner Micky Arison, team president Pat Riley and former teammate and current front office executive Alonzo Mourning.

Wade said the past few days have been physically and emotionally draining, but he's committed seeing to his son's health. He said getting back to basketball Saturday was tough and he's had very little sleep since Thursday, when he missed the team's morning shootaround for what was then listed as personal reasons. Heat coach Erik Spoelstra confirmed that Wade was at the hospital with Zion later Thursday.

"Everybody understood why I wasn't playing the other night," Wade said. "It was good getting back out here. It felt like I was off for three weeks. I couldn't breathe.

"So it was good to get out here and blow it out a little bit, being out here with the guys in the midst of them talking junk to each other. We had our whole group in here today, which was great."

That group also included Green, who was with the team for the first time since before he missed the Nov. 3 game against Atlanta with what the team then said was an undisclosed illness.

Green was hospitalized a day later after he allegedly punched a man during an altercation in the lobby of his downtown Miami condo, according to Miami police records. Green was kept away from the team for a week, and then Riley announced Tuesday he would be suspended two games for conduct detrimental to the team.

Green, the Heat's leading scorer off the bench at 10.6 points per game, was able to return Saturday after serving the suspension during Tuesday's win over the Lakers and Thursday's win against Utah. He repeatedly apologized Saturday and said he was focused on earning his way back into the rotation. The league monitored the investigation, and the Heat were ultimately cleared to discipline Green.

"This whole situation is one I'm ashamed of," Green said. "But I'm just trying to get over this situation. I can't apologize enough to the residents who lived in my building, my fans and this organization that definitely had my back. It's a situation I'm not proud of, but I'm ready to move forward."