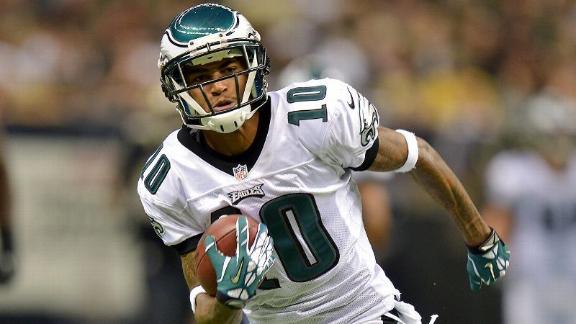 The Philadelphia Eagles had been silent about DeSean Jackson since they released the polarizing wide receiver last month.

Kelly said releasing Jackson was "purely a football decision" and had nothing to do with an NJ.com report linking Jackson to gang members in California.

Lurie backed Kelly's decision to release Jackson and said, "It was clear [to Kelly] it was not a fit."

"Chip and his people were incredibly clear that for us to get better, we needed to take a step back and reconfigure the wide receiver position," Lurie said, according to the team's website.

Lurie said he gives Kelly the benefit of the doubt.

"He knows what he wants, and he knows how to get there," Lurie said. "I really believe it's an organization that absolutely supports the direction we're going, and that's the best way to be. Everyone is in it together, and I think Chip is always going to base things not just on statistics but how you're going to perform and how you are going to perform in the playoffs."

Kelly added that the Eagles tried to trade Jackson but decided to release him after they couldn't find a trade partner at the owners meetings in Orlando, Fla.

"We were going in a different direction at the wide receiver position," Kelly said, according to the team's website. "We came back from the owners meetings and we had no takers from a trade standpoint, so we thought that it was best at that point and time to release him.

"It has nothing to do with anything that was ever written in a newspaper or any off-field behavior from him."

Kelly also denied that he had an issue with Jackson.

"DeSean was great the year I was with him. We wish him nothing but the best in terms of where he's going to be. It's a decision that we made as a team that a lot of teams make at that point and time," Kelly said, comparing the move to the Buccaneers' release of cornerback Darrelle Revis, the Bears' release of defensive end Julius Peppers and the Cowboys' decision to part ways with linebacker DeMarcus Ware.

Jackson, a three-time Pro Bowler, had 82 receptions for 1,332 yards and nine touchdowns last season. Soon after his release, he signed with the Washington Redskins for a reported $24 million over three years.

"I don't know about any red flags," Gruden said. "I know he's a great football player. We met him, I felt great about his character. Time will tell, but I don't foresee any challenges in that regard. He's a good player. He's been productive. I think we're excited to have him, and anything off the field we're not concerned about."

General manager Bruce Allen said the Redskins did their due diligence on Jackson and were helped in the process by what players said. Allen also said the team didn't want to prejudge Jackson.

"The player community is a very small group, and everybody knows each other," Allen said. "They know the good and the bad and the indifferent. We felt very comfortable [with] what we found out about him and felt very comfortable after talking to him and spending a day with him and seeing how he'd fit into the locker room. Our players embraced him."

Eagles: Jackson Cut Was 'Football Decision'
Herm Edwards discusses why the Eagles may have come to the conclusion that they would be better off without the productivity contributed by WR DeSean Jackson.