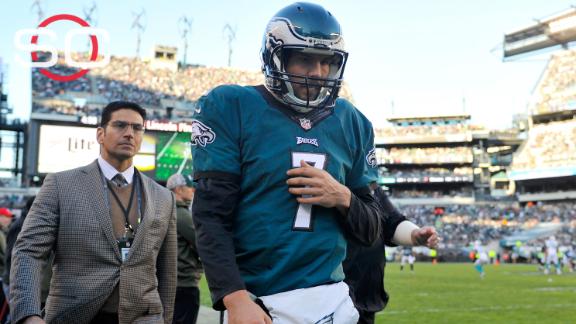 Bradford left the game in the third quarter after he was sacked by Miami linebacker Chris McCain and landed on his left (non-throwing) shoulder. The Eagles announced after the game that Bradford also had been diagnosed with a concussion.

Bradford, who is in the league's concussion protocol, could miss this week's game against the Tampa Bay Buccaneers, but wants to see how much improvement he experiences during the week before a decision is made on his playing status, sources told Werder.

Bradford was replaced in Sunday's game by Mark Sanchez, whofinished 14-of-23 for 156 yards.Sanchez drove the Eagles to the Dolphins' 8 late in the fourth quarter but was intercepted in the end zone.

Bradford was appearing in his ninth regular-season game after missing all of 2014 and half of 2013 with two tears of his left ACL. Bradford missed 41 games during his five seasons with the St. Louis Ramsfrom 2010 to 2014.

Information from ESPN.com's Phil Sheridan and The Associated Press was used in this report.