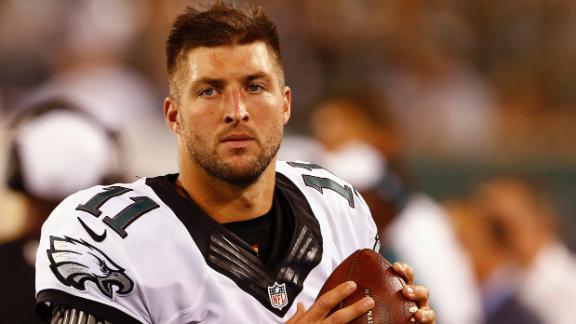 The Eagles have released Tim Tebow, ending the former Heisman Trophy winner's bid to win the No. 3 quarterback job for Chip Kelly in Philadelphia.

Tebow was one of 22 players released Saturday by the Eagles, who also cut veteran offensive lineman John Moffitt and rookie running backRaheem Mostert.

"We felt Tim has progressed, but we didn't feel he was good enough to be the [No.] 3 right now," Kelly said.

All NFL teams needed to reduce their rosters to 53 players by Saturday's 4 p.m. ET deadline, but Tebow appeared to be in contention for a roster spot after Philadelphia traded Matt Barkley to the Arizona Cardinals on Friday.

The move leaves Kelly and the Eagles with two quarterbacks on their current roster. Tebow, 28, and Barkley had been competing for the Eagles' No. 3 quarterback job behind Sam Bradford, who has a lengthy injury history, and Mark Sanchez.

"[Tebow] really improved his throwing motion from when he was throwing a couple of years ago," Kelly said. "He worked extremely hard on it and deserves a lot of credit for that. I talked to him a little earlier [Saturday] when we released him.

"He just needs to get more playing time. Get out there and get actual reps. Because he has done a ton on his own from an individual basis, but it is about taking that next step and playing the game."

Bradford looked sharp in limited preseason action, but he had surgery to repair a torn left ACL twice since he last played in a regular-season game in October 2013.

Kelly said Saturday that the Eagles were planning on acquiring a third quarterback. It's possible Tebow returns to the Eagles if either Bradford or Sanchez gets hurt. He also can come back after the season opener and his contract won't be guaranteed.

"We are not done," Kelly said. "There could be a third quarterback. We'll see what happens with the waiver wire. Whether we add a quarterback to the active roster or the practice squad, we'll see."

Although he did not start in Philadelphia's preseason finale, Tebow played well Thursday against the New York Jets, completing 11 of 17 passes for 189 yards and two touchdowns.

Tebow won the 2007 Heisman Trophy and helped Florida win two national championships during his college career but has not appeared in an NFL regular-season game since December 2012.He was cut by New England in training camp in 2013 and worked as a college football analyst on the SEC Network last year, but got another chance to play in the NFL when the Eagles signed him in the offseason.

The Eagles and Moffitt, who had been attempting a comeback after retiring in 2013, agreed to a one-year deal in June.

Mostert, an undrafted rookie, led the NFL with 351 yards from scrimmage during preseason play.