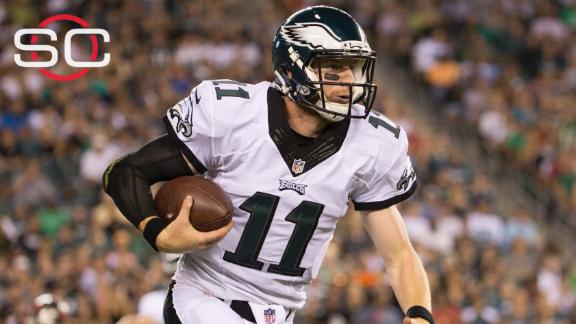 Philadelphia Eagles quarterback Carson Wentz is out with a hairline fracture in his ribs that could cost the rookie the rest of the preseason.

The Eagles announced Wentz's injury, suffered Thursday on a hit in the team's preseason game against the Tampa Bay Buccaneers, on Saturday.

"Carson felt some discomfort and soreness as we began this morning's practice. We decided to limit him throughout the remainder of practice and, as a precaution, sent him for a CT scan after practice. The scan revealed a hairline fracture in his ribs," Eagles coach Doug Pederson said in a statement. "We do not know an exact timetable for his return, but we hope to have him back before the end of the preseason."

Wentz remained in the game after the hit. He warmed up for practice Saturday but did not take part in seven-on-seven or full-squad drills.

"I think it was the next-to-the-last play of the game," Pederson told reporters prior to the injury announcement. "He got hit pretty hard on the right side, stayed down on the ground for a while. [He's] just sore. Bothered him to throw a little bit."

The Eagles have road preseason games at Pittsburgh on Thursday and at Indianapolis on Aug. 27. Pederson's plan called for Sam Bradford and Chase Daniel to play more in those games. Wentz was expected to play more in the Sept. 1 preseason finale against the New York Jets.