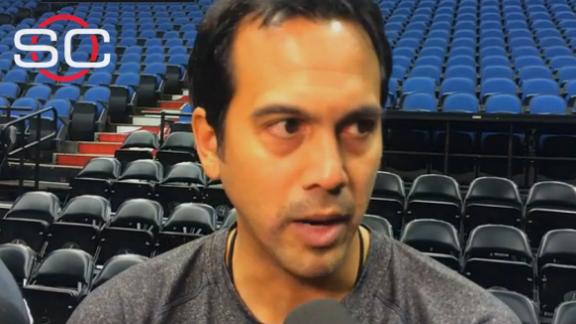 MINNEAPOLIS -- Miami Heat coach Erik Spoelstra said reserve guard Gerald Green "is safe and is healthy," one day after he was hospitalized for a still-undisclosed reason.

Spoelstra declined to offer any further specifics on Green's condition after the team's morning shootaround before Thursday night's 96-84 win over the Minnesota Timberwolves, but teammates Chris Bosh and Dwyane Wade said they have reached out to Green to let him know they are there to support him.

"Obviously our minds are on Gerald right now,'' Spoelstra said. "We're grateful that he's safe and he's healthy right now. Our thoughts are with him and his family.''

Green did not play Tuesday night in Miami's loss to Atlanta because of what the team called an illness. He was taken to the hospital the next morning, and the reasons for that and how long he will be away are still unclear.

Wade said he spoke to Green on Thursday morning and was told "he was doing better.''

"Whenever a teammate is sick or there's an illness, we all reach out,'' Wade said. "That's just what we do. Whenever something happens in one of our teammates or family's lives, we all reach out. That's a part of this basketball family that we're all in.''

According to a 911 call obtained by TMZ, the caller said Green had passed out and was bleeding in the valet area outside the condo where he was staying.

TMZ also reported that multiple witnesses said Green was acting strangely in the lobby of the condo -- screaming at the top of his lungs -- and that it took several people, including emergency personnel, to restrain Green and get him on a stretcher and into an ambulance.

The Miami Herald reported that Green was not arrested, according to Miami police, but that Miami-Dade Fire and Rescue requested assistance because of a "combative patient" at the address where Green lives.

Bosh said he has reached out to Green but had yet to speak to him directly. Guard Mario Chalmers accompanied Green to the hospital on Wednesday.

"We always say we're a family-first organization and we prove that by making sure guys are OK,'' Bosh said. "I think even yesterday, [Chalmers] being with him and making sure he was OK was a huge thing.''

Players said they have not been told the specifics surrounding Green's hospitalization. Miami authorities have said there are no ongoing investigations involving Green.

"Knowing that our brother is OK, we can go out and play with an eased mind,'' Heat captain Udonis Haslem said.

The super-athletic Green signed as a free agent in July after spending the previous two seasons in Phoenix. He led the Heat in scoring in the preseason and cemented himself as Wade's primary backup at shooting guard.

"I can't remember the last time I had someone who does what he does backing me up,'' Wade said last week, one of several instances of the 11-time All-Star raving about his new teammate in recent weeks.

But Green's stellar preseason was not without incident. He was fined $25,000 by the NBA after the league determined he made "menacing gestures'' -- trigger and throat-slash signs -- in a game against Washington.

Green was a pivotal part of the Heat rotation during Miami's first three regular-season games, averaging 10.3 points. He missed Tuesday's game against Atlanta unexpectedly with what the team only described as an illness. His signing helped Miami achieve a top priority over the summer, that being improving a second unit that was inconsistent last season when the Heat went 37-45 and missed the playoffs.

While Green is away, Spoelstra said the Heat will lean on their depth on the wing to get by and counseled the second unit not to try to do too much to fill the scoring void.

"They don't have to go out of their personality to do it,'' Spoelstra said. "One of the best things that second group has been doing is defending and playing with great toughness and energy. And that has to be their mindset.''