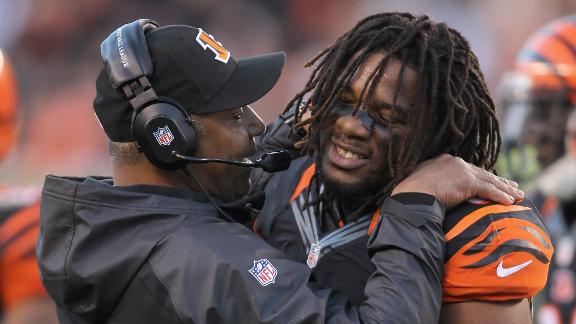 CINCINNATI -- Bengals coach Marvin Lewis has been criticized from the minute he made comments during his Wednesday afternoon news conference that concussions "linger longer" now because of the media attention that head injuries receive.

One of his most vocal critics was NFL Players Association president and former player Eric Winston, who expressed his thoughts on Twitter.

Lewis' comments came during a portion of his weekly news conference in which he was asked about Burfict and the intense, aggressive, emotion-filled edge he plays with. Those same traits have made Burfict one of the more penalized players in the league, and one who has started getting a negative reputation for some of his post-whistle antics.

A source told ESPN's Ed Werder that Burfict was fined $25,000 this week for twisting the ankles of Carolina Panthers quarterback Cam Newton and tight end Greg Olsen after he had tackled both in last Sunday's 37-37 overtime tie in Cincinnati.

In a fiery interview session with Panthers reporters the day after the game, Olsen called for Burfict to be suspended for the actions and called out his style of play.

"He's a hard-nosed player," Olsen said. "His style of game is what he is. It's why he knocks himself out half the time."

The latter portion of Olsen's comment was in reference to the three concussions Burfict has had since the end of last season. He already has had two in back-to-back weeks this season. The concussions forced him out of the season opener at Baltimore and the Week 2 game against the Falcons. They also kept him sidelined for three weeks before he returned last weekend against the Panthers.

Despite leaving the game briefly for what the Bengals said was a "hit to the head," Burfict returned and finished the game.

It's the only game he has finished this season.

At one point during Lewis' news conference, a reporter asked about at what point the coach becomes concerned about Burfict not only as a player, but as a human being, given his number of concussions.

Replied Lewis: "He had a concussion against Atlanta. That's the biggest concern. You don't want him to have ... again, I coached defense and linebackers for a long time and concussions didn't linger. Now we've found that because of the media and things they seem to linger longer. There's a lot of attention paid to it. I don't know why they linger longer, but I don't remember them lingering like they do now."

The NFL in recent years has intensified its approach regarding concussions and renewed its policies related to the level of medical scrutiny players must go through before getting cleared to play again after a concussion. Many of the league's concerns stem from long-term health issues retired players have experienced, and recent research that has made some connections between former player deaths and head trauma.

Lewis was asked after Wednesday's practice if he wanted to clarify his comments. He declined, acknowledging he probably shouldn't have broached the topic in the first place.