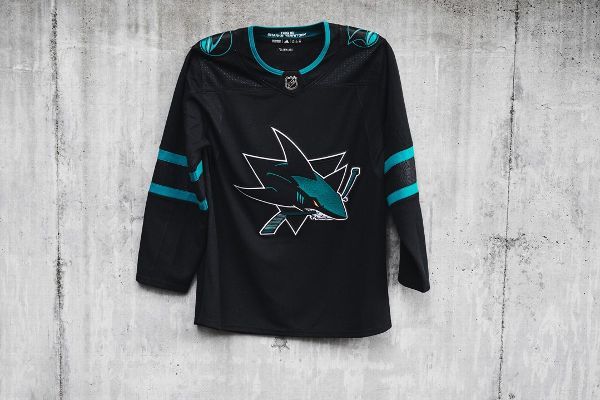 SAN JOSE, Calif. -- Erik Karlsson made his debut in front of San Jose Sharks fans on Saturday night. Not as a defenseman, but as a model.

The crowd roared as Karlsson skated out in the Sharks' new third jersey, the "stealth" black-on-black sweater, during the first intermission of San Jose's preseason game against the Vegas Golden Knights at SAP Center.

The star defenseman, who was sent to San Jose from Ottawa in a stunning trade this month, has yet to play for San Jose, so this tightly guarded stunt was his first appearance in front of Sharks fans.

Karlsson said he's a fan of the Sharks' different looks, after years of wearing red and black with the Ottawa Senators.

"I like it. It suits me well. It suits everybody well," said the 28-year-old.

The new third jersey from Adidas features limited doses of the team's signature teal look and hardly any other color.

"The only orange is the eye, and the only white is the teeth," said Doug Bentz, vice president of marketing and digital for the Sharks.

It's not the first black jersey for the Sharks, who wore them from 2008 until the NHL and Adidas did away with all existing third jerseys last season. While traditionalists sometimes sneer at the proliferation of black sweaters in the NHL, the Sharks have opted to introduce one after seeing a surge in new, younger season-ticket holders in the past three years.

"We wanted to take their tastes into consideration," Bentz said. "We don't want to go too far, where we lose our sense of being a hockey team. But we wanted to be a little more compelling and relatable to those fans. The black-on-black is very much on-trend, but it also pays homage to our history."

That homage can be found on the shoulders, as the original shark-fin patch that was found on the team's inaugural sweaters reappears here -- although it has been blacked-out as well.

The revamped look was inspired by the team's moniker.

"This might be a little bit cliché, or even a little bit corny, but when we thought about the jerseys, we thought about actual sharks. When you watch Shark Week, you see how they actually hunt. They're stealth. Very hard to pick up. Attack from the deep. When they get you, you're gone," said Bentz, who likened that to the team's play during dominant stretches of the game.

The process of creating the jersey was a lengthy one, with the Sharks having gone through "two to three hundred variations" of the design. It began with Terry Smith, who created the Sharks' logo and has been involved in subsequent revamps. Then Adidas collaborated on the jersey, which led to perhaps its most unique feature: a raised, embossed design on the sleeves that is supposed to mimic the pattern of a Silicon Valley microchip.

It's one of the first jerseys that uses this process. Inside the pattern are the letters "SJ."

"We wanted to have something that the players were proud of wearing," Bentz said. "But we also wanted something that was innovative, which is part of the culture of our organization."
Report a correction or typo
Related topics:
sportsespnerik karlssonnhlsan jose sharks
Copyright © 2021 ESPN Internet Ventures. All rights reserved.
TOP STORIES
What to expect when CA lifts its COVID restrictions on June 15
Out-in-the-open theft at SF Walgreens caught on video
Pet missing after dog walker's truck stolen in Oakland
Newsom says vaccinated CA workers won't have to wear masks after June 17
How bad will CA's fire season be in 2021? Here's what we know
Young climate activists marched 266 miles from Paradise to SF
Why restaurants may see reduced capacity after CA reopening
Show More
Medical therapies are available for immunocompromised people
How Giants broadcasters adapted to calling road games from home
GA cashier shot, killed after argument over face masks: Sheriff
Newsom unveils new vacation vaccine incentive program
SJ fire likely started by balloons hitting transmission lines, officials say
More TOP STORIES News