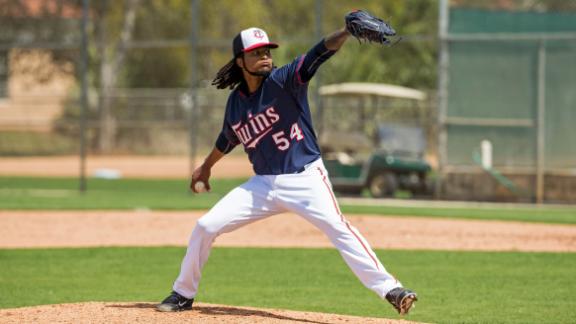 Minnesota Twins pitcher Ervin Santana has been suspended for 80 games without pay, Major League Baseball announced Friday, leaving the team without its No. 2 starter just days before the regular season begins.


Santana was suspended after testing positive for stanozolol, a performance-enhancing substance. The suspension is effective for the first 80 games of the regular season.

In a statement released through the players' union, Santana said he did not know how the PED got into his system.


"I preach hard work, and don't believe in short cuts," Santana said. "I am very disappointed that I tested positive for a performance enhancing drug. I am frustrated that I can't pinpoint how the substance in question entered my body. I would never knowingly take anything illegal to enhance my performance."


He had been slated to start the Twins' second game of the season against the Detroit Tigers after putting up a 1.89 ERA in spring training. Mike Pelfreywill be the No. 5 starter to take Santana's spot in the rotation.


"It's disappointing. It's difficult," Twins GM Terry Ryan said. "We had a fairly decent spring. Now we've got to regroup here and hopefully it won't affect us as we move forward."


The Twins announced before their exhibition game against Boston that they will recall left-hander Aaron Thompson from Triple-A Rochester to take Santana's place on the staff.

New Twins manager Paul Molitor said he had a conversation with Santana following the news but declined to discuss the specifics. He also addressed the team as it tries to regroup before opening the season Monday in Detroit.


"One thing that players know is adversity is a huge part of our game, and this is obviously something that no one really saw coming," Molitor said. "So I just tried to assure them that I believe in the group that we have, and we will deal with it in the best possible way that we possibly can. It doesn't change how I expect us to compete."


Santana was 14-10 with a 3.95 ERA in 2014 after signing a one-year contract with the Atlanta Braves. Santana parlayed a successful season into a four-year, $55 million deal with the Twins, the largest contract in franchise history. The suspension will cost Santana $5.9 millionof his $13.5 million salary this season.


"Moving forward, I need to be more careful on what I consume in my home country, I will be more vigilant of medications I take so that I don't commit another mistake," Santana said. "Having said that, I believe it is best to move forward and accept the punishment that has been negotiated by MLB and MLBPA for my positive PED test. ...


"My deepest apologies to my family, fans, colleagues, teammates and my current employer the Minnesota Twins. All I can do now is continue to work hard, and when the suspension is up, come back to doing what I love."


This is the third penalty for a positive stanozolol test reported by MLB in the past eight days, following Seattle pitcherDavid Rollins and Atlanta pitcherArodys Vizcaino.


A person familiar with the penalties told The Associated Press that MLB will look into whether there's a common source to the three cases. The person spoke on condition of anonymity because the investigation is not finished.