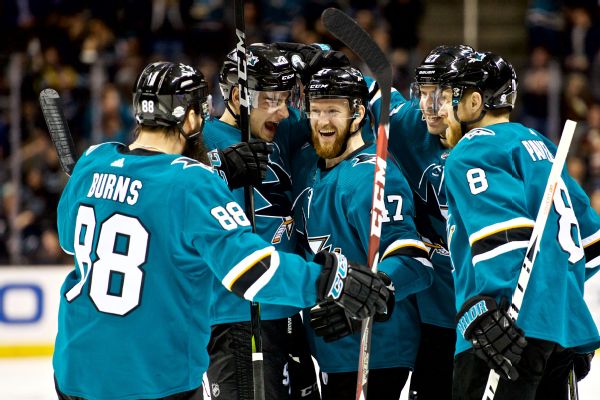 SAN JOSE, Calif. -- Evander Kane was so excited about being traded from a last-place team to one in playoff contention that he raced to a cross-country flight to jump right into the lineup.

Kane made an immediate impact in his San Jose debut by assisting on two goals during a four-goal second period and delivering a few big hits that helped the Sharks beat the Edmonton Oilers 5-2 on Tuesday night.

"I kind of come from not playing so much meaningful hockey to playing some meaningful hockey," he said. "Obviously, you get a little ramped up and I just tried to change the game in any way I can. It's good to get on the board and contribute offensively and also with some other elements."

Joe Pavelski had a goal and three assists while centering San Jose's top line with Kane on his left wing. Justin Braun, Timo Meier and Logan Couture also scored in the second to help the Sharks snap a three-game losing streak and remain in sole possession of second place in the Pacific Division. Chris Tierney added an empty-net goal.

But the catalyst was Kane, whose arrival from Buffalo allowed coach Peter DeBoer to play four lines with confidence.

"He brings a little bit of everything to the table," DeBoer said. "That's why he's as valuable as he is and as highly thought of as he is in the league. I liked his game tonight. I thought he worked really hard away from the puck. The offense and physicality are things you take for granted, but I thought defensively and away from the puck, I thought he really worked hard."

Martin Jonesgave up a first-period goal by Connor McDavid and a third-period tally by Jesse Puljujarvi but made 24 saves for the win.

The Sharks looked like a different team than the one that stumbled in the final three games of their recent road trip, getting outscored 13-4. General manager Doug Wilson provided a big boost Monday when he dealt two conditional 2019 draft picks and prospect Danny O'Regan to the struggling Sabres for Kane.

Kane got acclimated at the morning skate and moved right onto the top line with Pavelski, his former teammate in Russia during the 2012-13 lockout, and Joonas Donskoi.

That line was San Jose's most dangerous right from the start as Kane had a couple of wraparound attempts in the first period before helping the Sharks get on the scoreboard in the second.

Kane hitMatt Benningin the corner to start the sequence on San Jose's first goal when he sent a shot from the boards that Pavelski redirected past Cam Talbot to tie the score at 1.

"It's a good element for our team right now," Pavelski said. "That's one thing that I think everyone is so excited for, that edge that he plays with. That compete level. You see it right away."

Kane, who had only seven points in his final 26 games with the Sabres, added a secondary assist on Braun's goal that gave the Sharks the lead, and then got into a scuffle with Benning in front of the net later in the second.

Kane's line then hemmed the Oilers in on the forecheck later in the third, leading to Meier's 16th goal after a line change against a weary defense.

Couture broke it open with his 26th of the season late in the second, ending the Oilers' three-game winning streak.

"The four goals that they did score were them creating turnovers in the (offensive) zone and pouncing on it," forward Milan Lucic said. "Twenty minutes lost us the game and it's unfortunate with the start we had and a chance to have a great road trip."

McDavid got Edmonton off to a fast start with his 13th goal in the past 14 games. Andrej Sekera blocked a shot from Marc-Edouard Vlasic, sending McDavid in on a 2-on-1 that he converted.

Talbot made 29 saves. ... Pontus Aberg, acquired last weekend from Nashville, got the assist on Puljujarvi's goal in his debut for Edmonton. ... Pavelski has four goals and five assists in three games vs. Edmonton this season. ... Willie O'Ree, the first black player in the NHL, dropped the ceremonial first puck.