Even in new threads, McCutchen will be at home in Pittsburgh

ESPN
By Jerry Crasnick
During Andrew McCutchen's 673 home games as a Pittsburgh Pirate, he developed an appreciation for franchise history and a sense of comfort at PNC Park. But he never once felt emboldened enough by his achievements to see the statues of Honus Wagner, Willie Stargell, Roberto Clemente and Bill Mazeroski outside the stadium and entertain the possibility that he, too, might be immortalized in bronze one day.

"I don't think I'm that important,'' McCutchen said. "Those are guys in the past who did great things, who won championships. I didn't do that. I didn't win championships. I had some personal accolades, but we made the playoffs and that was it. Those are great guys who were there for a very, very long time. As far as me, I'm just a guy who is a part of history, but not to that stature.''

But sometimes a player's impact is measured more in hearts touched and warm memories triggered than trophies hoisted and champagne sprayed. Neil Walker, Pittsburgh born and raised, received a standing ovation when he returned home as a New York Met in 2016. Now it's McCutchen's turn to feel the love.

The festivities will be carefully choreographed when McCutchen returns to Pittsburgh in a San Francisco Giants uniform Friday night. He'll hold a pregame news conference for the local media and be recognized during two in-game celebrations. The Pirates have scheduled a brief video in conjunction with his first plate appearance in the top of the first inning. A longer, more elaborate video presentation will take place when he jogs out to right field in the bottom of the first.

"Our fans, for good reason, love Andrew and what he stands for and everything that he did,'' general manager Neal Huntington said. "There are going to be a lot of McCutchen jerseys -- some black and gold, and maybe even some black and orange. Throughout the ballpark, I fully anticipate an incredibly warm welcome.''

The buildup stems from McCutchen's impact as a driving force behind the franchise's emergence from baseball hell. McCutchen joined the Pirates as the 11th overall pick in the 2005 draft, as part of a stacked first round that included future All-Stars Justin Upton, Alex Gordon, Troy Tulowitzki, Ryan Braun, Ryan Zimmerman and Jay Bruce. Over nine seasons in Pittsburgh, McCutchen won a Most Valuable Player award, made five All-Star teams and led a franchise burdened by 20 straight losing seasons to three straight playoff appearances from 2013 to 2015.

He's in some impressive company statistically. McCutchen ranks fourth behind Stargell, Ralph Kiner and Clemente -- and right in front of Barry Bonds and Dave Parker -- with 203 home runs, and he's in the top 10 among Pirates in doubles, walks, strikeouts, wins above replacement, runs created and adjusted OPS+.

Beyond the numbers and awards, McCutchen showed a commitment that endeared him to the fans. He signed a $51.5 million contract extension in 2012 that was universally regarded as club-friendly, and three years later he won the Roberto Clemente Award for sportsmanship, community involvement and his contribution to his team. During a memorably touching encounter in 2015, McCutchen brought two young Pirates fans to the verge of tears when he handed them his batting gloves at the end of a victory over the San Diego Padres.

"For me, Andrew McCutchen has earned a place among the all-time great Pirates,'' club president Frank Coonelly said in an email to ESPN.com. "I will leave his exact ranking among Clemente, Wagner, Stargell, the Waner brothers and the other great Pirates to baseball historians and sabermetricians, but I have no doubt that Andrew is on the very short list of the all-time greats of this historic franchise.''

Aside from the statistics, Coonelly said, "what makes Andrew so special to this franchise is that he was the offensive leader of the club that finally brought baseball all the way back in Pittsburgh after a very difficult run for this proud franchise. I will always remember the joy and pride on Andrew's face when the 2013 club won its 82nd game in Texas and again when it clinched a playoff berth in Chicago.

"When your best player is also a truly wonderful person who generously gives his time, talents and love to improve the lives of others in your community, you are fortunate as a club to have a genuine superstar on your team, and that is exactly what we enjoyed during Andrew's nine years here.''

Business and sentiment inevitably collided in January when the Pirates sent McCutchen to San Francisco for outfielder Bryan Reynolds and pitcher Kyle Crick. The Pirates valued McCutchen's deep bond with the fan base. But they studied how things had worked out with David Wright, Braun, Joe Mauerand Joey Votto -- franchise mainstays who had signed lucrative second deals with their original clubs -- and feared the model might not work with McCutchen if his performance slipped noticeably, or they lacked the resources to field a competitive team around him.

"Pittsburgh is a baseball town that is being destroyed by a greedy owner,'' the petition began. "There are so many loyal fans who truly care and support this team through thick and thin. We deserve better.''

One company pulled its advertising from the Ogden Newspaper Group, the chain owned by Nutting's family, and the MLB Players Association filed a grievance in February against the Pirates and three other clubs for allegedly hoarding their revenue-sharing money.

Meanwhile, six weeks into the season, the Pirates are playing better than anyone expected. They're 21-16 and third in the National League Central even though McCutchen is gone, Gerrit Cole is pitching like a Cy Young candidate in Houston and Josh Harrison, a two-time All-Star, is out six weeks with a broken left hand.

So how will fans react upon McCutchen's return?

Jim Wiltman, a season-ticket holder since 1992, describes himself as a "bad baseball expert.'' While he plans to attend Saturday's game against the Giants and cheer McCutchen at the plate, he supported management's decision to trade McCutchen and send Cole to Houston in a five-player deal in January. Wiltman does not rank McCutchen's homecoming on a par with goaltender Marc-Andre Fleury's February return to Pittsburgh as a member of the Vegas Golden Knights -- or even Barry Bonds' first game back in Pittsburgh as a Giant in the mid-1990s.

"Andrew is a good guy, and he was a great face of the franchise for a few years,'' Wiltman said. "He helped turn the team around. But he needed a change of scenery, and so did Cole. It's not as if they traded Babe Ruth. The Pirates aren't in a position where they can spend a lot of money on a guy with diminishing skills who's on the wrong side of 30.''

Mark McDonel, a 30-year season-ticket holder, also holds an opinion that he considers contrary to the majority of Pirates fans.

"There are two perspectives,'' McDonel said. "From an emotional perspective, it's a shame. Andrew was here for such a long time and he represented the Pirates so well in so many ways. From that perspective, it was hard to see him go.

"But from a practical reality, I understood the decision, and I agree with it and support it. Baseball's economic system is broken, and this is a microcosm of that. The easy way out for the Pirates would have been to do nothing and let him roll into the free-agent market, and they wouldn't have to endure the criticism. But they were willing to take the short-term pain to try and improve the team long term. I'm energized by that as a fan.''

McCutchen's final years in Pittsburgh were marked by developments that put a strain on his relationship with the team. The Pirates moved him to right field in April 2017, only to shift him back to center when Starling Marte received an 80-game suspension for PED use. Trade rumors began swirling around McCutchen entering the 2016-2017 offseason and persisted until the day he departed.

If Coonelly has one regret in hindsight, it's that the team didn't do a better job of articulating its long-term vision to the fans.

"It was always going to be challenging to explain how making the very difficult decision to trade Andrew McCutchen for two young players was consistent with our commitment to build a championship club,'' Coonelly said. "Notwithstanding that degree of difficulty, I wish I had done a better job of explaining why, at this particular juncture for the organization, this was the type of extremely difficult decision that we needed to make to put us in the best position to return to the playoffs as quickly as possible.''

During his transition, McCutchen eased the burden on the Pirates by going out in style. He wrote a goodbye noteto Pittsburgh in the Players' Tribune and posted a heartfelt tweet that received 87,000 likes.

Pittsburgh.My Home.My Fans.My City. The placed that raised me and helped mold me into the man I am today. You will 4ever be in my heart.A tip of the cap to all who have been on this journey with me. With Love and respect,

"Everything is branded with choice,'' McCutchen said. "You have a decision to make on what you say, what you do, how you act, how you react. I always choose to respond in a manner that if I look back five or 10 years later, I'm pleased with what I said and what I did. I don't want to try and react off pure, raw emotion just because of something that happened that maybe I didn't agree with.

"I'm not perfect, but I try to make a conscious effort to take a deep breath and think before I speak. That's the biggest thing. That's why I said what I said and the reason things came off the way they came off. That's why there's no bad blood.''

As McCutchen adapts to San Francisco, a piece of him remains in Pittsburgh. He still has a house in the suburbs, and he's looking forward to sleeping in his own bed and commuting to the park this weekend. In November, McCutchen's wife, Maria, gave birth to their first child, a son named Steel. While it's natural to discern a Pittsburgh connection, McCutchen shakes his head "no" at the perception that the name choice was in honor of the Steel City.

"No significance to it,'' he said. "I love Pittsburgh, but it just worked out that way. We weren't necessarily thinking of something that has to do with the city. We just wanted a strong name, and that was the name we thought of.''

As the big homecoming awaits, Steel's dad knows he can only do so much to keep his emotions under wraps. How will McCutchen react when the highlights flash on the PNC Park scoreboard and all those fans in No. 22 jerseys join voices to express how much he means to them?

"You just have to try and embrace the moment and savor it, because it's not going to last very long,'' McCutchen said. "As much as you anticipate it, that quickly, it's going to be over.''

Nine years and 673 games will be compressed into a couple of videos, a standing ovation or two and maybe the tip of a cap or a wave in response. A city will show its appreciation, and a ballplayer's legacy in that city will flash before his eyes. 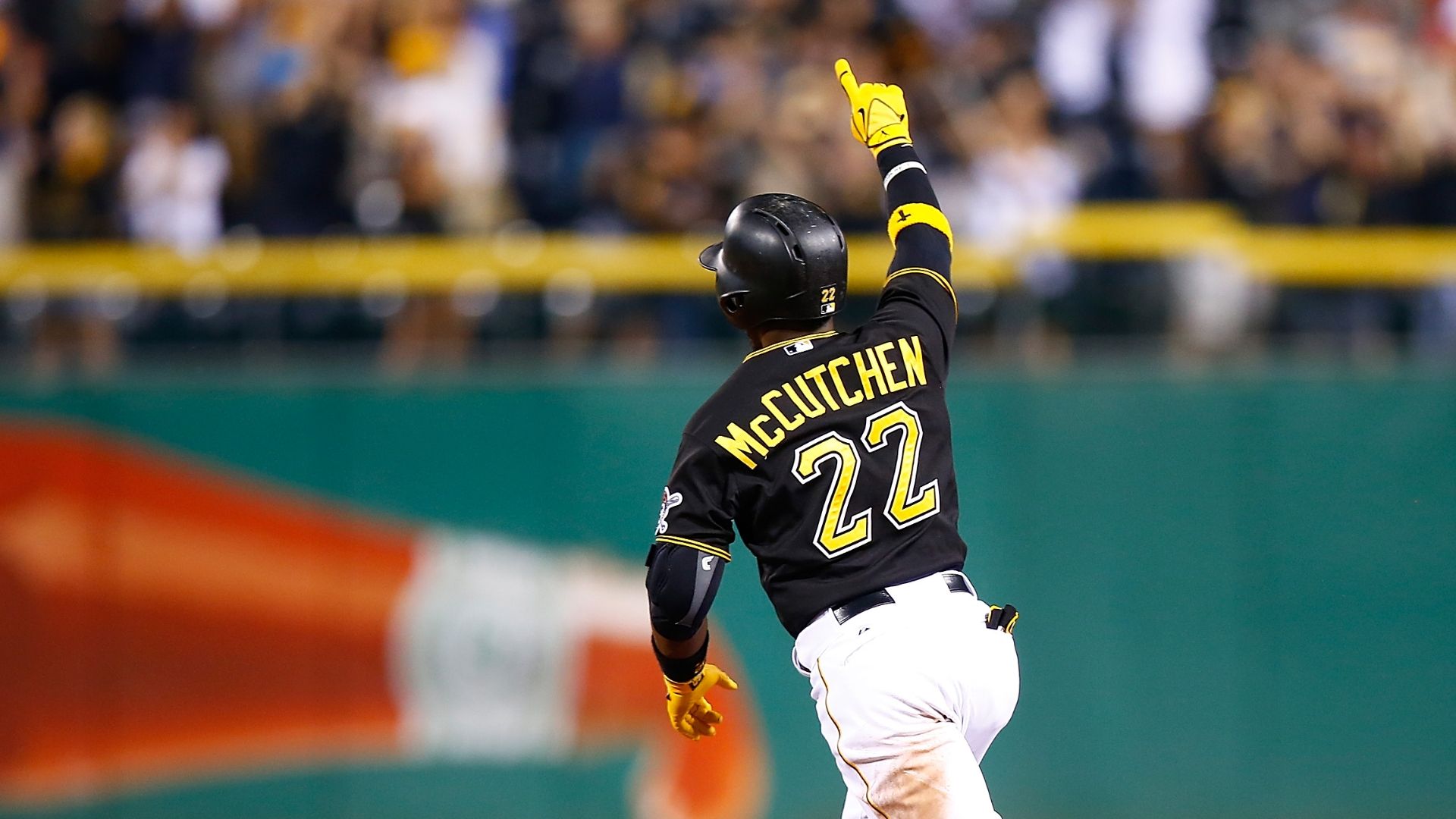