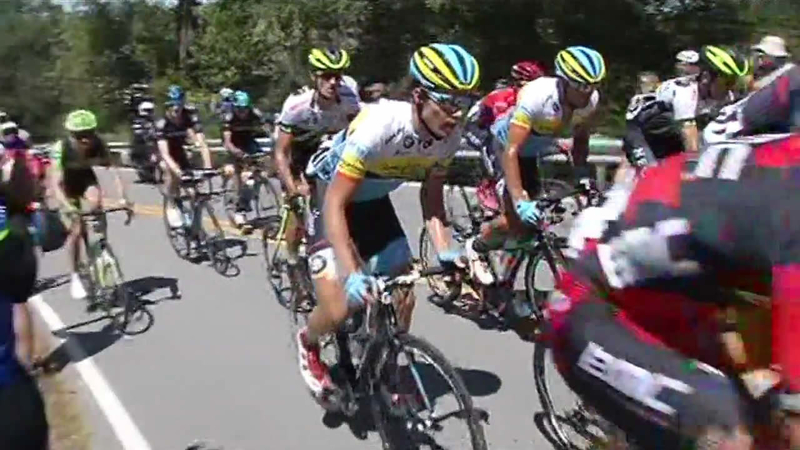 SAN JOSE, Calif. (KGO) -- The Amgen Tour of California rolled through the Silicon Valley for the tenth straight year on Tuesday, though many of the riders would claim that climb up Mount Hamilton was hardly a roll. It's one of the biggest bike events of the year, and San Jose is the only city to host a stage on the Amgen Tour of California every year since the race started in 2006.

#PICS: ...and they're off! Estimated finish time for this stage is around 3:45pm. #SanJose #cycling #AmgenTOC10th pic.twitter.com/ruT8Al4cqw

"I've watched the first couple stages on TV," said Santa Clara resident Harrison Price. "And you just never really get a sense of the speed that they're going at on TV."

Fellow Santa Clara resident Sam Rigel added, "It's inspiring. As a collegiate racer, it's cool co come out. We all dream about it. And to see what it's like, it's awesome."

Cycling enthusiasts assembled at San Jose's Berryessa Community Center, the starting point for Stage 3 of the Amgen Tour of California. The race was 105 grueling miles with multiple climbs, including Mount Hamilton.

Ellis and his family are visiting from New Zealand. They've decided to follow the entire tour in their rental car.

"We've never seen anything of this scale before, excitement-wise," he said. "It's just the crowds, the big banner behind me."

And they're off for the 10th consecutive year in #SanJose for the #AmgenTOC. pic.twitter.com/Rkr4eQu3Uy

Billed as "America's Greatest Race," it's an opportunity for fans to get in on the excitement.

"It's awesome," said San Jose resident Andrew Yee. "It's really a privilege and we're lucky to have that here."

"There's more of a chance, and especially at the start and the finish line, to actually talk to the riders," said Palo Alto resident Bill Straka.

Some spectators biked and hiked their way up to Quimby Road, hoping for an up-close encounter with the pros.

Spectators gathering at the Quimby Rd. KOM to cheer on their favorite competitors! #AmgenTOC10th pic.twitter.com/QciQmauHnr

"And you can see all the people that come out here who are not necessarily racers, they're just bicyclists who are excited about seeing the sport take hold," Oakland resident Rick Rickard said. "And it's another way to expose people to cycling."

It's an experience unlike any other in the American cycling world.

The next stage starts in Pismo Beach on Wednesday.

5 minutes away from the start of the #SanJose stage of the #AmgenTOC10th. pic.twitter.com/99FepzNRNL

#More: #Amgen stage starts at 10:45am near Berryessa Ctr. Crowd gathering to catch a glimpse of the racers. #SanJose pic.twitter.com/lYhW6VqVMQ

#RightNow: #Amgen athletes are taking their places at the starting line in #SanJose. #cycling pic.twitter.com/ayjJpuWXht

Good morning from @AmgenTOC! We're in #SanJose for stage 3. Cool start to the race. @MattKellerABC7 is live at 11am. pic.twitter.com/Jwm5XQ73kB