OAKLAND, Calif. -- Jessica Herrera and her brother Anthony never thought they'd meet baseball hall-of-famer Rickey Henderson, a player they cheered for at Athletics games growing up in the East Bay.

But a random twist of fate brought them together Sunday. The Herreras were leaving the Raiders game when Anthony realized he lost his phone. Jessica called it and a man answered.

"He just said, 'hello,' and I said, 'hey you have my phone. I'm willing to meet you anywhere,'" said Herrera.

The man said he was Rickey Henderson. He was at the game to light the Al Davis Memorial Torch, but Jessica assumed it was someone who shared the same name as the athlete. They agreed to meet in the North Oakland Regioal Sports Center parking lot -- where Highways 13 and 24 meet.

"All of a sudden this car comes up, a black escalade. A fancy, fancy car and I was like, oh my god it's really him! And we just started like, oh my goodness! And it was just such an amazing moment," Herrera told ABC7 News.

Anthony told ABC7 News he could not believe the superstar went out of his way to help a stranger. "He has a good heart. I could say that."

Henderson found the phone on his bumper -- he returned it, took some pictures, and signed autographs.

"He was like my idol growing up. I played baseball and everybody wants to steal bases and be like Rickey," said Anthony. "Doing a Rickey -- that was something we did growing up in the 80s."

ABC7 News reached out to the Athletics and was told Henderson thought the Herreras were great people and was happy to help. 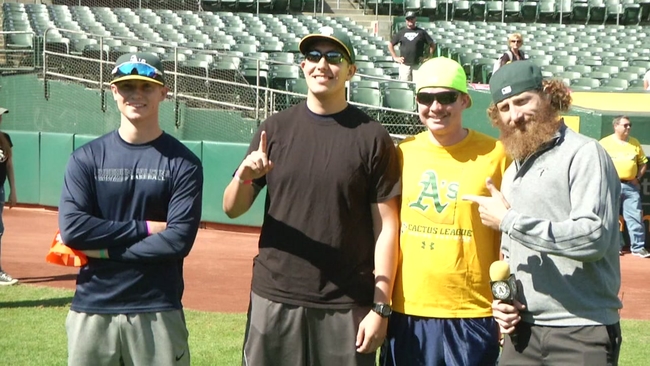