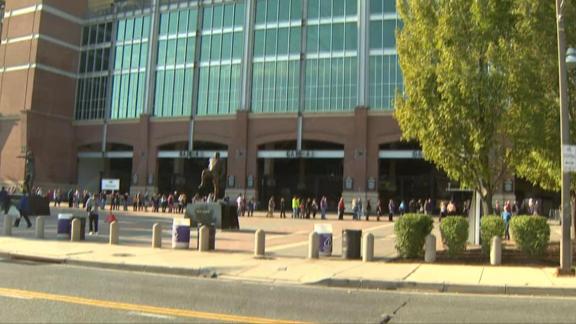 BALTIMORE -- Thousands of Ravens fans lined up with Ray Rice jerseys in hand to exchange them Friday in a team-organized event at M&T Bank Stadium.

Some people waited over two hours to trade in their No. 27 jerseys for ones sporting the names of Joe Flacco, Torrey Smith orTerrell Suggs at no cost.

Ravens officials won't announce how many jerseys were exchanged until the two-day event is over on Saturday. But the line stretched the lengths of two football fields by Friday afternoon.

"If you don't want the jersey, it's worth the wait," said Dana Liebman of Baltimore.

Rice was released by the Ravens on Sept. 8 after a video showed him striking his then-fiance unconscious.

Many fans said they didn't want the jersey based on principle.

"Everyone is not perfect. Everyone makes mistakes. I just can't wear the jersey," said Paul Billings, of Washington, D.C. "I think that's what everyone here would say. It's more than just a free jersey."

Rich Scherr, of Owings Mills, Maryland, arrived more than an hour before the jersey exchange started at 8 a.m. He said the first person lined up at 4 a.m.

There were over a thousand people lined up by the time the event started, Scherr said.

"I was a bit concerned with the lack of organization in the line, but once the process started in earnest, it was extremely well run," said Scherr, who got a Smith jersey.

There were some fans who walked away immediately when they saw the line. Robert Schwartz, of Baltimore, thought he was beating the crowd by coming Friday instead of Saturday.

"Apparently, it's a big hit already," said Schwartz, who was exchanging the Rice jersey for his daughter, who is a schoolteacher.

Jake Wink, of Westminster, Maryland, said the Rice jersey he traded in was the first one he ever owned. It was a gift for his 18th birthday.

"It hurts to give it away but quite frankly sometimes you have to do what is right," he said.