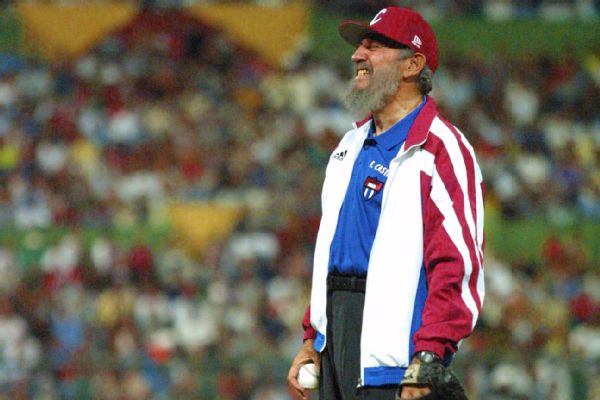 Fidel Castro, who led his bearded rebels to victorious revolution in 1959, embraced Soviet-style communism and defied the power of 10 U.S. presidents during his half-century of rule in Cuba, has died at age 90.

With a shaking voice, President Raul Castro said on state television in Havana that his older brother died at 10:29 p.m. Friday. He ended the announcement by shouting the revolutionary slogan: "Toward victory, always!"

Castro, who outlasted a crippling U.S. trade embargo as well as dozens, possibly hundreds, of assassination plots, died 10 years after a life-threatening illness led him to turn over power to his brother and a little more than a year after Cuba and the United States resumed diplomatic relations following 50 years of Cold War hostility.

The centerpiece of the détente saw U.S. President Barack Obama travel to the island nation to see the Tampa Bay Rays play a baseball game against the Cuban national team in March. It was the first time a major league team played in Cuba since 1999.

Born near Birán, Cuba, on Aug. 13, 1926, to a sugar plantation owner, Castro grew up in a wealthy household and attended El Colegio de Belén in Havana, where he pitched for the school's baseball team, played basketball and ran track. After graduation, he turned his attention to politics. Castro became one of the leaders of a revolutionary movement, and in 1958 he and his guerrilla forces began a campaign to successfully overthrow Cuban dictator Fulgencio Batista.

In February 1959, Castro became the country's new leader and remained in power until 2008. His socialist policies and cozy relationship with the Soviet Union led to contentious relations with the United States.

For decades, Castro was a source of inspiration and support to revolutionaries from Latin America to Africa, even as Cubans who fled to exile loathed him with equal measure.

In 1961, a CIA-trained group of Cuban exiles launched a disastrous invasion of the Bay of Pigs, an attempt to overthrow Castro. A year later, the U.S. and the Soviet Union engaged in a dramatic face-off over the installation of nuclear-armed Soviet missiles in Cuba, just 90 miles from Florida. The conflict nearly resulted in nuclear war.

His commitment to socialism was unwavering, though his power finally began to fade in mid-2006 when a gastrointestinal ailment forced him to hand over the presidency to Raul in 2008, provisionally at first and then permanently. Castro's defiant image lingered long after he gave up his trademark Cohiba cigars for health reasons and his tall frame grew stooped.

"Socialism or death" remained Castro's rallying cry even as Western-style democracy swept the globe and other communist regimes in China and Vietnam embraced capitalism, leaving this island of 11 million people an economically crippled Marxist curiosity.

He survived long enough to see his brother negotiate an opening with U.S. President Barack Obama on Dec. 17, 2014, when Washington and Havana announced they would move to restore diplomatic ties for the first time since they were severed in 1961. He cautiously blessed the historic deal with his lifelong enemy in a letter published after a monthlong silence.

Raul has announced plans to retire as president when his current term ends on Feb. 24, 2018. Vice President Miguel Diaz-Canel, a relatively younger leader, is seen as a possible successor.

In the Cuban capital, flags flew at half-staff at public buildings and some foreign embassies across the city Saturday. By midday, the U.S. Embassy's flag had not been lowered.

As Castro's rivalry with the U.S. played out in diplomatic and military crises, it also played out on baseball fields, in boxing rings and on rubberized tracks.

Soon after coming to power, Castro recognized the potential benefits of national excellence in athletics and Cuba eventually became one of the strongest sporting nations in the world -- despite a population only slightly greater than New York City's.

At the Olympics, Castro's athletes were at their best. Cuba won no gold medals at any Games from 1906 to 1968, but all of that changed beginning in 1972. In Munich, then in Montreal and then in Moscow -- Games the United States boycotted -- Cuba was an Olympic force. Heavyweight boxer Teofilo Stevenson won three consecutive gold medals and Alberto Juantorena became the first man to win both the 400- and 800-meter races.

Cuban sport was back in the international spotlight in 1991 as the nation hosted the Pan-Am Games, which, more than any athlete, Castro dominated. He seemed to be at every venue, cheering every heat and every Cuban athlete.

The following year, Cuba returned to the Olympic fold just in time to win the first Olympic baseball championship, defeating the U.S. and delighting Castro. Soon thereafter, many of its top players started defecting to the United States, where, instead of earning the equivalent of a thousand dollars a year, they could sign contracts worth millions of dollars.

In December 2014, Obama and Raul Castro announced a restoration of diplomatic ties between the two countries. And on March 22, 2016, in Havana's Estadio Latinoamericano. the Rays defeated the Cuban national baseball team 4-1 -- a game attended by Obama, Raul Castro and Rachel Robinson, the widow of baseball legend Jackie Robinson.

Fidel Castro was not in attendance. Ever the revolutionary, he castigated the United States in a column he wrote three days after the visit, saying, "We don't need the empire to give us anything."