Bay City News
SAN FRANCISCO -- Pyrotechnicians were busy at work Saturday morning at San Francisco's Pier 50, putting the finishing touches on a fireworks show that will help kickoff Super Bowl City Saturday evening, as well as a slew of events happening this coming week throughout the Bay Area, ahead of Super Bowl 50.

At 7:45 p.m. Saturday, fans inside of the free Super Bowl City at San Francisco's Justin Herman Plaza were able to watch a 12-minute fireworks show, which was put on by Macy's.

About 15,000 firework shells, some reaching heights of 1,000 feet, were launched off of two barges near the Bay Bridge as a soundtrack of football anthems and songs by past halftime performers plays, according to Macy's officials.

The show's designer, Gary Souza with PyroSpectaculars by Souza, said he and his team took about four months to plan and design the fireworks.

"The expectations are high to do something bigger and better than ever," Souza said.

"Macy's is known for our fireworks and to be able to bring them to San Francisco and officially kick off the week, we couldn't be prouder," Kule said.

A second and similar fireworks show will take place off the Bay Bridge again on Feb. 5 at 10 p.m., just two days before the Super Bowl game, organizers said.

Saturday's fireworks show was also significant because it helped ring-in the permanent relighting of the Bay Lights art project on the Bay Bridge's western span.

Fireworks display along the Embarcadero as Super Bowl week kicks off. pic.twitter.com/ghBsJlRLWu

Late last year, Caltrans crews replaced the 25,000 LED lights on the bridge with new lights, which Caltrans officials say are more durable and will last longer.

The lights, which were first installed in 2013 as part of the Bay Bridge's 75th anniversary celebration, were removed in March to allow Caltrans crews to perform maintenance on the bridge.

In addition to the fireworks show and Super Bowl City, various other events will be held all over the region ahead the Super Bowl 50, which takes place Feb. 7 at Levi's Stadium in Santa Clara.

On Saturday, San Francisco's Moscone Center, at 747 Howard St., will host the National Football League Experience Drive By Hyundai. The event, which goes through Feb. 7, will feature interactive exhibits and attractions, including a chance to meet current and former football players and an opportunity to see the Vince Lombardi Trophy up close.

On Sunday, 32 teams made up of kids and teens from across the country will compete in the NFL Flag Championships, starting at 10:30 a.m. at the Beach Chalet Soccer Fields in San Francisco's Golden Gate Park at 1500 John F Kennedy Drive. Then on Monday at 4:30 p.m. the championship games will be held at the Moscone Center, where current and former NFL players will serve as guest coaches.

The NFL Foundation will hold its 10th annual Bowling Tournament Feb. 5, starting at 4 p.m. at Lucky Strike at 200 King St. in San Francisco. The tournament will see teams of amateur bowlers being captained by NFL players. Proceeds from the event will benefit the NFL Foundation.

Also on Feb. 5, at 7:30 p.m., the Oakland's Paramount Theatre at 2025 Broadway will be home to the 17th annual Super Bowl Gospel Celebration. The event will bring together football players with award-winning Christian, gospel and mainstream artists, according to event organizers.

On Feb. 6, starting at 8 a.m., the 30th annual NFL Foundation Golf Tournament will take place at the Half Moon Bay Golf Links in Half Moon Bay. Several current and former NFL athletes will attend the 18-hole tournament, which will benefit the NFL Foundation and the NFL Player Care Foundation.

Also on Feb. 6, the Taste of the NFL organization will hold it's annual Party with a Purpose event, celebrating the fundraising it has done throughout the year, which has provided more than 192 million meals for people at food banks across the country, according to the organization. The event takes place at 7 p.m. at the Cow Palace at 2600 Geneva Ave. in Daly City. Television personality and chef Andrew Zimmern is this year's Culinary Host. For tickets, event-goers can visit www.tasteofthenfl.com. 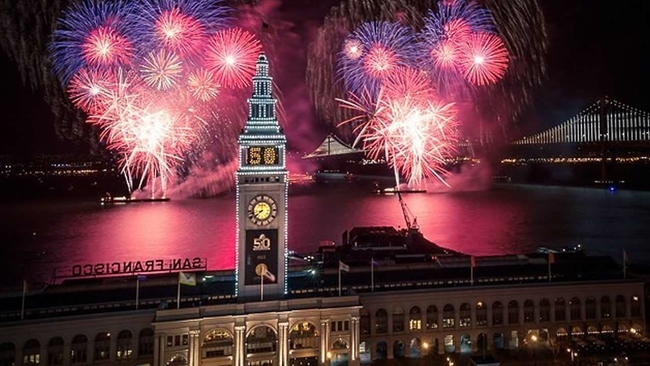