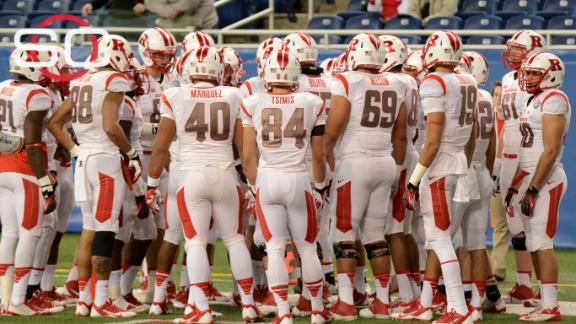 FiveRutgersfootball players have been suspended after one was charged in two home invasions and four others were charged with assaulting a group of people in April --another jolt to a program whose coach is embroiled in an ongoing academics-related probe.

The playershave been suspended from the program indefinitely,Rutgers athletic director Julie Hermann said in a statement.Barnwell, Boggs and Stephenson were starters.

The arrests were announced by the Middlesex County Prosecutor's Office. Sophomore defensive back Andre Boggs, 20, was charged with robbery, burglary while armed and conspiracy to commit an armed robbery as part of the investigation into the home invasions.

"We continue to monitor the situation. We will have no further comment as this is a pending legal matter," Hermann said in her statement.

The prosecutor's office said the aforementioned four surrounded a group of at least four other individuals, including a 19-year-old male Rutgers student, in New Brunswick, New Jersey, and assaulted them unprovoked on April 25. The student suffered a broken jaw.

The home invasions also included the alleged involvement of former Rutgers player Tejay Johnson, prosecutors said.The investigation began after police were called to a home invasion in New Brunswick on April 26. Police were told that three masked men forced their way into the home and stole cash and marijuana from five students at gunpoint. Johnson was arrested in that case and then linked, along with Boggs, to another home invasion on April 27. Armed with a baseball bat and a knife, the pair are alleged to have forced their way into that home and robbed a student of approximately $900 and an undisclosed amount of marijuana.

Barnwell, according to an NJ.com report, is at the center of Rutgers' investigation into whether coach Kyle Flood violated school or NCAA rules by allegedly sending an email to a faculty member inquiring about the player's academic status.

After Thursday's practice, Flood said there is no resolution to the matter but added, "I have no reason to believe I will not be coaching on Saturday" against Norfolk State.

There was a higher security presence, with a security officer blocking Scarlet Knights Way, the road to the Hale Center. More Rutgers officials than usual attended practice.

Hermann attended practice but didn't comment. The university has been examining Flood's actions for about a week.

Flood did not ask the professor to change the player's grade but addressed what the player could do to improve his grade.

The university's policy requires all communication with faculty members about a student-athlete's academics to go through the team's appointed academic adviser. Any contact with a professor that could be deemed an attempt to change a player's grade would be considered a violation of NCAA rules.

Flood has continually declined comment on the investigation, citing that he wants to be respectful to the university process.

Flood is entering his fourth season as coach. He's 23-16, taking the Scarlet Knights to a bowl game in each of his first three seasons.