Garoppolo aims to bounce back at site of injury 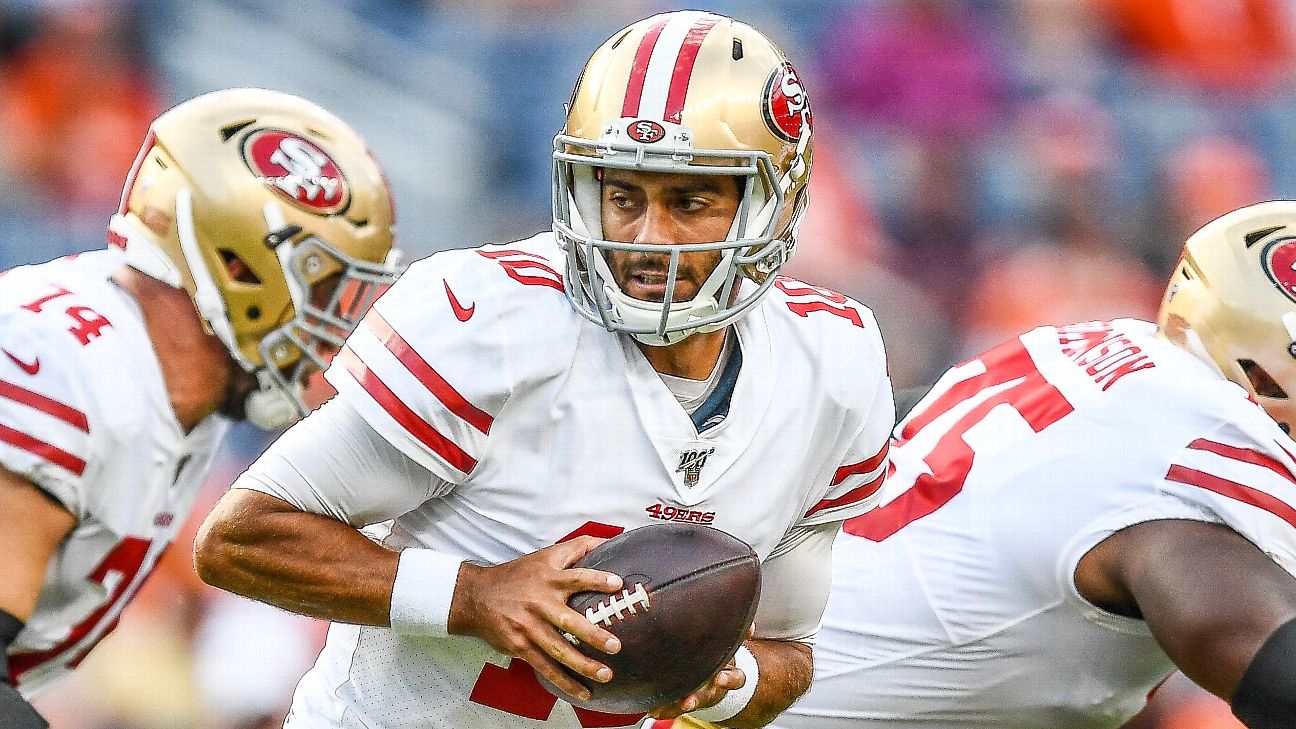 ESPN
By Nick Wagoner
SANTA CLARA, Calif. -- After a rough stretch in which he threw five interceptions in a practice and posted a 0.0 passer rating in a preseason game five days later, San Francisco 49ers quarterback Jimmy Garoppolo is aiming to move on in the same stadium where he suffered a season-ending injury in 2018.

On Thursday, Garoppolo said he was "very hard" on himself when he watched the film of his 1-of-6 for 0 yards with one interception performance against the Denver Broncos on Monday night, and again when he re-watched it on Tuesday.

But Garoppolo, who said he's sure he's had a similar week before in his career, also reminded himself he doesn't have time to think about it any more as he prepares for the regular season opener on Sept. 8.

Moving forward this week for Garoppolo means a trip on Saturday to Arrowhead Stadium in Kansas City, the same venue in which Garoppolo tore the anterior cruciate ligament in his left knee on Sept. 23 of last season.

In the days after that game, Garoppolo admitted to replaying the injury in his head, pondering what he'd have done differently and everything that led up to the injury. On the play, Garoppolo scrambled down the left sideline before attempting to plant his left leg and turn upfield. The left leg buckled as he threw himself into Chiefs defensive back Steven Nelson.

That injury cost Garoppolo the remaining 13 games of the season and set him on a lengthy rehabilitation that is still ongoing as he gets re-acclimated to playing in live games again.

"It will be a good steppingstone," Garoppolo said of his return to Arrowhead Stadium. "Definitely, it will be a little weird getting back there but (I'm) just trying to treat it like a normal game."

That's a task that likely would have been made easier had it not been for Garoppolo's recent struggles. Monday's game in Denver was his first live action in 330 days and the rust was readily apparent.

It was also the first time Garoppolo could be tackled since the injury, and it resulted in some discomfort in the pocket.

Niners coach Kyle Shanahan, who has cautioned against making too much of preseason struggles, suggested Thursday that getting back in game action was another in a line of mental hurdles for Garoppolo to clear as he comes back from injury.

"I know anytime you come back from injury, there's a bunch of mental hurdles you have got to get over even when you are healthy and feel good," Shanahan said. "I'm sure there's some stuff with it just being eerie going back to that same place."

Although Shanahan said he felt it would have been "a matter of time" before Garoppolo got going against Denver, he opted to take him out after just 10 snaps with an eye toward Saturday night in Kansas City.

Garoppolo should have ample opportunity to get back on track against the Chiefs. Much like last preseason, Shanahan said Garoppolo and the starting offense will likely play the entire first half, depending on how many snaps they get and how it's going.

Shanahan didn't rule out the possibility of some snaps in the third quarter if the offense doesn't get the needed work in the first half.

"It will be good," Garoppolo said. "Hopefully we get to string some plays together, get some good drives and everything and get the offense moving. It's taking it from the practice field and bringing it over to the game field and making it happen."

In the meantime, Garoppolo said he has done his best this week to block out the outside criticism of his performance in Denver and focus on fixing the mistakes of last week.

At the top of that list was the interception he threw in the first quarter that came as a result of poor communication on an offensive line protection. Garoppolo and Shanahan went over the play with Shanahan emphasizing the importance of making sure everyone gets any changes up front.

Those are the type of errors that can be corrected and should go away as Garoppolo gets more opportunities. As Shanahan is quick to point out, many of Garoppolo's growing pains should have already happened.

"That's all Jimmy needs is just to play football," Shanahan said. "Whether he was coming back from injury or not. We thought we were going to get that last year and unfortunately we didn't and that was out of everyone's control. So now we're back to that plus he's coming off an injury with it. So I want Jimmy to play as much as possible in the preseason and into the regular season, but that's a fine line, too. You don't want to put your quarterback in there against a starting defensive line when you don't have your starting O-line in there. So trying to balance that out."

Garoppolo, who still has just 10 NFL starts to his name, said Thursday his knee is holding up well and he intends to bounce back against the Chiefs.

"It's one of those things that you can react two ways to it: You can crumple up and kind of go into a fetal position and surrender, or you can go out and fight," Garoppolo said. "We have got a locker room full of guys who want to fight, myself included. Every day you have to come in and earn your spot. It's never going to be given to you so you have got to come earn it."
Report a correction or typo
Related topics:
sportsespnsan francisco 49ersjimmy garoppolonfl
Copyright © 2020 ESPN Internet Ventures. All rights reserved.
More Videos
From CNN Newsource affiliates
TOP STORIES