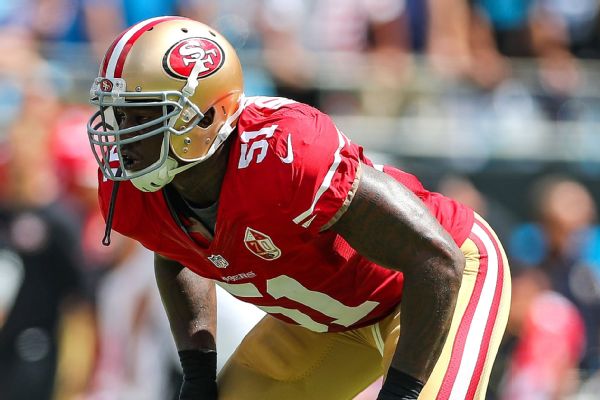 A source told ESPN's Adam Schefter that the sides agreed to a one-year deal.

Bills coach Sean McDermott said Thursday that Hodges was on his way to Buffalo and there was a "good chance" the Bills would sign him.

The Bills released cornerback Charles Gaines to make room on the roster for Hodges.Gaines did not play last season but started four games for the Cleveland Browns in 2015.

Hodges, 26, helped by a slew of injuries to the Niners' linebacker corps in 2016, took advantage of his opportunity to post his best NFL season before hitting the free-agent market. He finished with 83 tackles, three sacks, a forced fumble, a fumble recovery and two interceptions in his fourth NFL season.

A fourth-round pick by the Minnesota Vikings in 2013, Hodges was traded to the Niners in 2015. Injuries to linebackers NaVorro Bowman and Ray-Ray Armstrong cleared the way for Hodges to claim a starting job after he competed against Armstrong and Michael Wilhoite for the spot next to Bowman in training camp.

The Niners signed Armstrong to a contract extension before the end of the season, leaving Hodges free to test the market.