Giants asking for clarification on some officiating calls Sunday 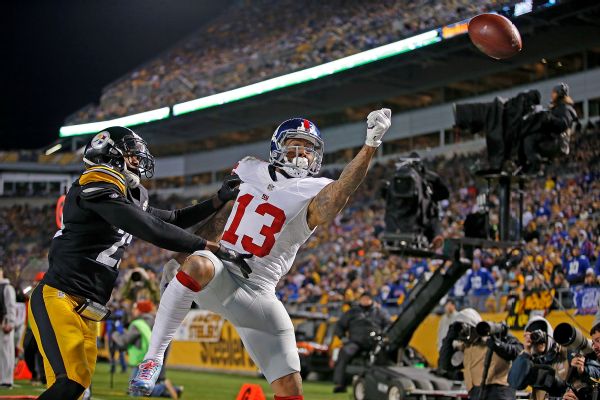 The New York Giants and coach Ben McAdoo are in need of some clarification about several calls made by the officials in Sunday's 24-14 loss to the Pittsburgh Steelers.

In particular, there were several plays involving star wide receiver Odell Beckham Jr. where there appears to be disagreement.

"I would say I thought there were a few times [Sunday] that he may have been interfered with," McAdoo said Monday. "But that is part of the process. We're going to send it in to New York and to the officials [in the NFL office] and let them take a look at it and get some feedback from it and some clarification."

Beckham expressed his disapproval about the officiating Sunday night, especially an offensive pass interference call in the first quarter, but he said he didn't think it cost the Giants the game. He also didn't think referee Terry McAulay's crew should officiate any more Giants games.

Beckham doesn't have to worry about seeing McAulay again this year. A crew cannot work the same team more than twice in the same season.

No other Giants expressed a similar opinion after Sunday's loss in Pittsburgh. McAdoo took the high road on Monday.

"We don't have control over any of that, and we have a process to gain clarification on calls that are made during the course of a game," McAdoo said. "We're going to get plenty of use out of that process this week and, other than that, we need to focus on what we can control and learn from this game and prepare for the next."

Beckham, who finished with 10 catches for 100 yards, wasn't happy with more than just the offensive pass interference penalty. He was visibly upset with several non-calls throughout the contest.

When asked if he was OK with the amount of time Beckham spent talking with the officials on Sunday afternoon, McAdoo didn't directly address the question.

"Again, we have a process we have to go through," he said. "We're going to send the plays to New York that we want clarification on and go from there."