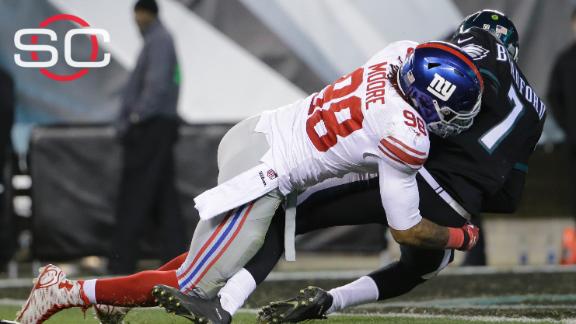 The fine is high because it's not Moore's first offense, which points to something of a larger issue with Moore, a talented former third-round pick whose development has been held back by on-field and off-field maturity issues.

"He's obviously high-energy, he does give outstanding effort, there's no question about that," Giants coach Tom Coughlin said Tuesday when asked if Moore was a player he could "trust" on the field. "But with regard to that, there's absolutely no excuse for anyone for the unnecessary roughness penalty that he committed [Monday] night. I realize he may not have known what's going on behind him, but clearly, clearly to understand the way in which the quarterback is protected -- and rightfully so -- and what can and can't be done from a standpoint of his position, there's no excuse for that. You used the word 'trust,' I don't know. That's a good word."

Moore's penalty came at an inopportune time for the Giants' defense, which had stopped the Eagles on third down but then had to stay on the field for a fresh set of downs. The Eagles' drive continued and resulted in a game-tying touchdown, the first seven of 27 straight points Philadelphia scored to win the game.

"There's been a lot of sitting down and talking," Coughlin said. "I certainly will do more of it, and he is very good about listening. But we've got to see whether it can hold true on the field."

The Giants would like to get Moore involved to a greater extent in their defense, as he offers a pass-rush skill they could really use. Only two teams in the league have fewer sacks than the Giants' eight. But the Giants' coaches worry about putting Moore on the field and having him commit penalties that cost them more than his presence benefits them.

"That's a double-edged sword, in my opinion," Giants defensive coordinator Steve Spagnuolo said. "You love the high motor. You love the fact that he loves to play the game and he plays it hard. The flip side is that there are a number of plays this year where his hustle and determination and going full-speed all the time has helped us. But having said that, that's the kind of penalty that you can't afford. It's hard to stop anybody in this league in three downs, and when you do it, you want to get off the field and be proud of that."