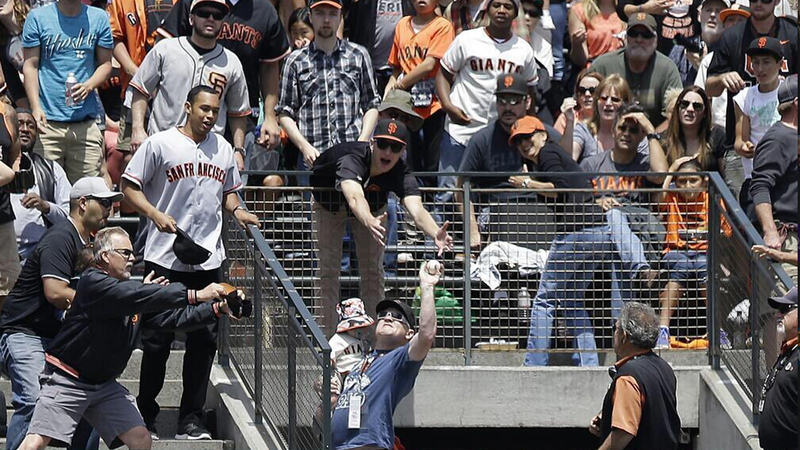 SAN FRANCISCO (KGO) -- A home run hit by Colorado Rockies player Troy Tulowitzki was not good for the Giants, but it was great for one San Francisco Giants fan.

Without skipping a beat, Rob Winner calmly reached up and caught the ball while holding his one-year-old son Thomas in his arms. He then quietly walked back to his seat.

"I was waiting, talking to Gary the usher and saw the ball got hit that way, then stepped up, reached up, caught it and went back to my seat," said Winner.

Winner is a San Rafael fire captain. He was away from his seat for just a couple minutes during Sunday's game so he could change his son's diaper. The play happened so quick, even his wife didn't know what happened.

"Someone told me. I didn't believe him, he comes back and hands me the ball and I was like "Oh, I guess you did catch it," said Lindsay Winner.

The spectacular one handed catch - with a kid a kid in tow - is the second one this weekend at AT&T Park. During Saturday's match up another Giants fan caught a foul-ball while holding a child in one arm. Rob is a hard core Giants fan and he's got the season tickets to prove it so he's not very happy that the Rockies swept his team this weekend. But in that spirit of Father's Day he was happy to help another new father out.

"Tt's Tulowitzki first Father's Day. He wanted the ball back. So I gave him the ball and he gave me an autographed ball from him," said Winner.

The signed ball will be added to the family collection of baseball memorabilia.

"I got a ball signed by Lefty Gomez when I was five. My dad introduced me to him and had him sign it, it's one of my fondest memories, so I hope this will be great memory for Thomas," said Winner.