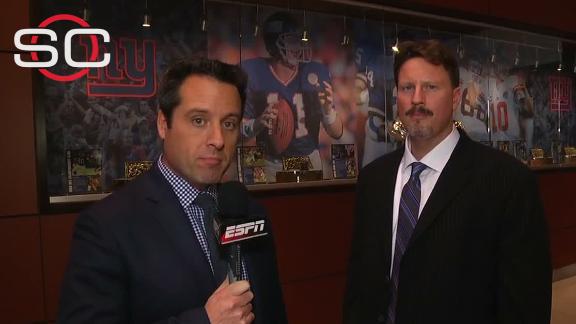 EAST RUTHERFORD, N.J. -- Clearly a little nervous, and practically swimming in a suit that looked even bigger on him than the figurative shoes he has to fill, Ben McAdoo stood on the podium Friday for the first time as head coach of the New York Giants.

"This job is not for the faint of heart, and I'm the right man for the job," the 38-year-old McAdoo said. "I'm hardened, battle-tested and I've been groomed for this opportunity by Super Bowl-winning coaches, players and organizations. We're going to assemble a staff and a locker room that the fans can rally around, we're going to set our jaw, and we're going to get to work."

McAdoo has been the Giants' offensive coordinator for the past two years, after spending the previous 10 years as an NFL assistant coach under Mike McCarthy in New Orleans, San Francisco and Green Bay. The past two years were his first two as a coordinator at any level, and his first job as a head coach will be replacing Tom Coughlin, who spent 12 years in that position with the Giants and won the Super Bowl twice.

McAdoo declined to discuss the composition of his coaching staff, calling it "fluid" and saying he would announce it all at once when it was complete. Sources have told ESPN in recent days that Steve Spagnuolo is expected to stay on as defensive coordinator, quarterbacks coach Mike Sullivan is expected to be the new offensive coordinator, former Dolphins coach (and fellow former Packers assistant) Joe Philbin is expected to join the staff, and McAdoo likely would retain his offensive play-calling duties. But the details of all of that and the composition of the rest of the staff remain to be sorted out in the coming days and weeks.

"We're in evolution, not revolution," McAdoo said. "There are a lot of good coaches around the league, and we're going to sit down and talk to some different people and not rush into anything and take our time."

Giants co-owner John Mara said the decision to go with McAdoo was made Wednesday after the team learned two key things: (1) That former Bengals offensive coordinator Hue Jackson had canceled his scheduled Thursday interview and accepted the job as head coach of the Browns, and (2) that the Philadelphia Eagles were seriously considering McAdoo to be their head coach. So Mara, GM Jerry Reese and co-owner Steve Tisch met with McAdoo for a second interview Wednesday and made the decision that night to give him the job.

"I thought about the Mike Tomlin scenario quite a bit," Mara said, referring to the Steelers coach who got the job at age 35 and has held it for the past nine years. "He came out of nowhere and is one of the best coaches out there. I think this guy has everything that he needs to be a successful head coach. That's why we hired him. We want to bring back the pride to this team. It has been a rough 3 years."

The Giants finished 7-9 in 2013, 6-10 in 2014 and 6-10 in 2015. It's the first time since an eight-season stretch from 1973 to 1980 that the Giants have had three straight losing seasons. They have not made the playoffs since 2011, the year they won their most recent Super Bowl title, and Mara has spoken more than once this offseason about the sorry state of the roster and the need to improve the personnel. He said Friday that the most important thing the Giants can give McAdoo is more talent to work with.

McAdoo and Mara made it clear that GM Reese would still pick the roster, though he'll be consulted on the draft and free agency as Coughlin was.

"This is not about blaming Tom," Mara said. "This was an organizational failure on our part, starting with me and working its way down. We all have to take some blame. Now it's up to us to turn it around."

McAdoo, whose success with quarterback Eli Manning during his two seasons as a coordinator burnished his head-coaching rsum, said whatever roster he had would be "committed to discipline and poise" and that his message to the players would be about pride and work ethic.

"'Obsessed' is a word the lazy use to describe the dedicated," McAdoo said. "We will be dedicated in our football."

For the record, McAdoo said the suit he wore to the news conference fit him "about 60 pounds ago," and that he's lost a considerable amount of weight recently. He coaches in sweats and likely will continue to be seen around the building in more casual work attire than what he wore Friday.