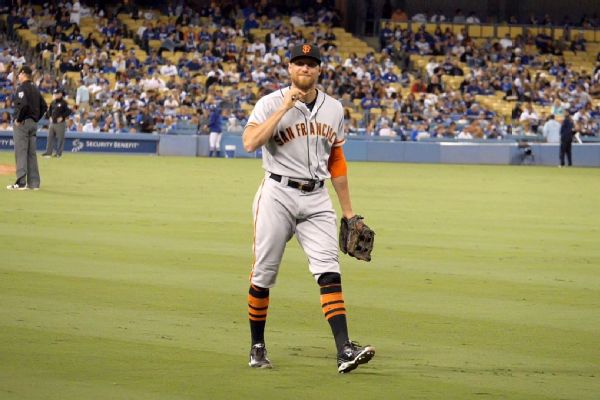 In a game at Dodger Stadium last month, San Francisco Giants outfielder Hunter Pence carried some ashes of a deceased Dodgers fan with him in a necklace that he wore on the field.

According to a documentary commissioned by UNINTERRUPTED, the Dodgers turned down a request to spread some of the ashes of Henry Janiszewski, who died in 2010, at the ballpark. Filmmaker Matt Liston of the digital series "Mr. Impossible" said he contacted Pence, who agreed to help Janiszewski's daughter.

Melissa Janiszewski had already spread some of her father's ashes at several other places he revered around the world, but she wanted to bring them to one final place, where she said she spent many evenings of her childhood enjoying baseball with her father.

Pence, a former Houston Astro, donned the necklace for all nine innings on Sept. 22, the night Los Angeles clinched the National League West title and celebrated the 90th birthday of Hall of Famer Tommy Lasorda, L.A.'s former manager. Pence played right field, and the game video shows him checking on the necklace after a sliding catch.

Liston says the Pence-Janiszewski episode is part of a campaign to get Major League Baseball teams to designate days when they would grant the wishes of fans who would like to spread up to an ounce of a loved one's ashes in designated areas of the park. He cites ESPN SportsNation poll data indicating more than three-quarters of those surveyed were willing to spread a family member or friend's ashes at a stadium, and says officials of MLB teams told him that this is already frequently done clandestinely.

Pence said in the film that he agreed to wear the ashes simply to help a fan.