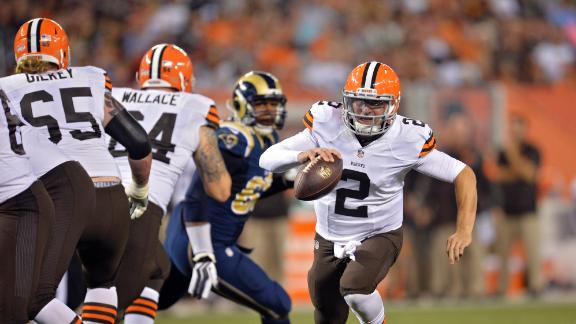 BEREA, Ohio -- Ray Farmer has seen the offseason photos of Johnny Manziel out on the town. He has seen the ups and downs of his rookie quarterback in practice and games. But one thing the Browns general manager has not seen is a reason to believe the former Texas A&M star won't become the franchise player that Farmer envisioned when he drafted him 22nd overall three months ago.

"I think he is right where he's supposed to be," Farmer told ESPN.com in a wide-ranging interview on Friday before the Browns' 33-14 loss to the St. Louis Rams on Saturday night. "I laugh because it's four weeks into his first training camp and everyone is waiting to see Steve Young run out the tunnel. I don't know where the reality in that lies."

Young had a Hall of Fame career with the 49ers, but only after spending two years in the USFL, two years with the Tampa Bay Buccaneers and four and a half years on the bench in San Francisco.

"It's like anything else," Farmer added. "If you're learning a foreign language, guess what, you're not going to go to Spain tomorrow and in four weeks feel like you're fluent in the language and just start talking. It just doesn't happen like that. You may be able to communicate, but not effectively."

Manziel, in his first outing as the official backup after Brian Hoyer was named the starter for the Browns' season opener against the Pittsburgh Steelers, came on midway through the third quarter against the Rams and converted a takeaway into a four-play, 14-yard drive that culminated with him scrambling the final 7 yards for the score. He finished 10-of-15 passing for 85 yards and no turnovers. He was sacked twice by Michael Sam.

Asked about the possibility of a two-quarterback system this year -- something coach Mike Pettine admitted is a possibility -- Manziel said: "I feel like any way I can help contribute to this team, whether it's looking at a certain coverage, looking at something during the game, or getting in and having a certain package during the game, just anything that I can do to help this offense to win games -- that's the position I'm in and that's all I really want to do."

The Browns close out the preseason at home against the Bears on Thursday night.

Herm: 'Johnny's Better Off The Script'
Herm Edwards and Darren Woodson break down Johnny's Manziel's performance and the Rams' ability to win the NFC West.

Bradford Injured In Saints' Win
Sam Bradford reinjured his left knee and had to exit in the first quarter of the Rams' 33-14 loss to the Browns.