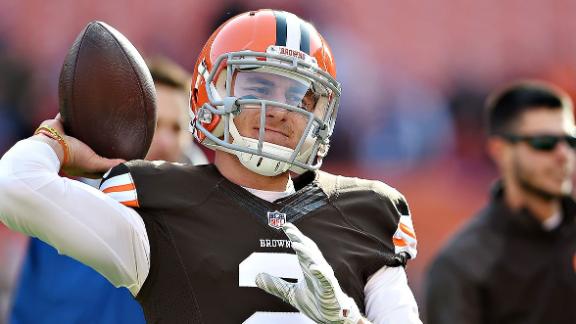 BEREA, Ohio -- Cleveland Browns general manager Ray Farmer insisted Tuesday that owner Jimmy Haslam had no influence in the selection of Johnny Manziel in the first round of the draft in May.

"He did none of those things," Farmer said.

Speculation has circulated that Haslam was involved in the pick in part because of a radio interview that quarterbacks coach Dowell Loggains gave shortly after the draft.

In that interview with an Arkansas radio station, Loggains described receiving a text from Manziel during the draft that read "hurry up and draft me" so he and the Browns could "wreck this league" together.

Loggains said that after receiving the text, he forwarded it to coach Mike Pettine and Haslam.

"As soon as that happened, Mr. Haslam said, 'Pull the trigger. We're trading up to go get this guy,'" Loggains said in the radio interview.

"I can say with 100 percent certainty that Dowell Loggains was not in the room when that discussion happened," Farmer said of the decision to draft Manziel.

Farmer expressed confidence that Manziel can rebound from his shaky rookie year but "would not hesitate" to draft another first-round quarterback if that's best for the franchise.

"The goal is to win," Farmer said.

Manziel finished 18-of-35 passing for 175 yards, two interceptions and a rushing touchdown in seven quarters of play this season. He was 0-2 in two starts, including a woeful 30-0 loss to Cincinnati when the team's playoff chances were intact.

Manziel told the local media on Dec. 23 he wanted to be "the guy" for the Browns and take the job more seriously, but four days later he was fined for missing a team walk-through/treatment session.

Farmer and Pettine have said they'd like to give Manziel a chance to compete in training camp in 2015.

"He'll be given every opportunity to contribute and compete, and he'll also have to compete against guys that could be draft choices," Farmer said. "They could be free-agent selections. They could be any number of stones that we overturn to try to find the right guy to bring in here to improve our roster."

Farmer echoed what Manziel and Pettine both said Monday about Manziel's off-the-field issues: Words mean nothing without action.

"I do think he can develop into a solid starter in this league, yes," Farmer said. "I think the sample size that's available is small. We all got to be patient. I think there's an opportunity for the guy to make changes, and it's up to him if he's going to make those changes. But I think the talent is in his body to accomplish that.

"I do think he cares. I do know he's competitive. At the end of the day, I'll be frank and candid -- it's obvious -- but he does need to grow up some. That maturity issue is there. But beyond that, I do think that there are redeemable qualities that can help him improve himself over time."

Manziel is one of three Browns players who found trouble over the weekend -- the team suspended Josh Gordon for missing the walk-through, among other offenses, and benched cornerback Justin Gilbert for missing a Saturday night meeting.

Farmer said Gilbert, who was also a first-round draft pick, has maturing to do but can improve with a focused offseason. As for Gordon, Farmer was noncommittal about his future but said his relationship with the Browns isn't "unsavable."

Jeremy Fowler of ESPN.com contributed to this report.

Haslam Calls Out Younger Players
Browns owner Jimmy Haslam comments on some of the younger players on his team who have engaged in irresponsible actions.