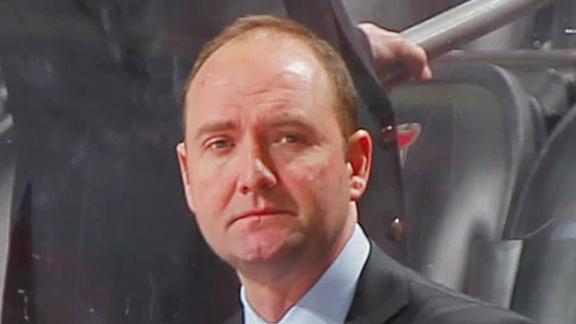 In an admittedly uncharacteristic move for Lamoriello, who seldom speaks publicly about contract negotiations or terms, the GM said DeBoer is under contract with the Devils for next season and will be back coaching the team.

"I'm definitely excited to be back," DeBoer said after the Devils' 3-2 win over the against the Boston Bruins at Prudential Center. "We have some unfinished business."

Lamoriello seemed irked by what he characterized as "rumors and misinformation" about DeBoer's status with the organization. Many reports indicated that DeBoer was approaching the end of a three-year deal, though that apparently is not the case.

DeBoer, who heard from Lamoriello that he would be back next season, would not comment on whether he received an extension or is staying on through 2014-15 under the original terms of his contract.

"Lou told me the first day I took this job that there's one person that talks about contract details and that's not me," he said.

Lamoriello did not take questions.

"That's all I have to say. I won't get into any other discussions," Lamoriello said. "Wherever the information is coming from, I can't answer that, but I thought I'd just put it to rest."

Prior to the game, DeBoer was asked whether he expected to be back with the team next season. Curiously, he sounded unsure.

"I don't know," he said in his pregame briefing with the media. "I think when you're a coach in this league, I think you come to work, you invest yourself fully in your job, your team and you do the absolute best job you can. I'm comfortable that our staff did that. Other people decide that or make those decisions."

Numerous reports have surfaced over the past week speculating on whether he will return to New Jersey after the club missed the playoffs for the second straight season. Some outlets reported that the Toronto Maple Leafs were interested, while others reported as late as Sunday morning that DeBoer was on the verge of an extension with the Devils.