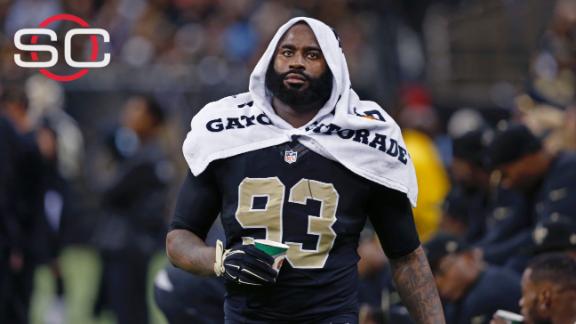 RICHMOND, Va. -- The Washington Redskins started their homework before the New Orleans Saints even released Junior Galette. Dozens of interviews later, including one with Galette himself, convinced them he was a risk worth accepting, Redskins general manager Scot McCloughan said.

In his first meeting with the media since signing Galette on Thursday, McCloughan said multiple people in the organization researched him.

"The decision was made because we really believe he's a Redskin and that's why I signed him."

Galette was released by the Saints less than a year after signing an extension worth up to $41 million. He remains under investigation by the NFL for various off-field issues and faces suspension.

Galette was arrested in January for domestic violence, but the charges were later dismissed. There's also a video from 2013 that shows a man who resembles Galette involved in a fracas on the beach during which the man strikes a woman. Galette's attorney has denied that the man was his client.

McCloughan said he spoke with Galette about the video and many other matters over the course of several hours.

"I did not like the video at all and as a matter of fact when I saw the video it was scary," McCloughan said. "That's why I wanted to meet with him face to face. That's why I had to sit down with him and ask him what happened. I got the real story and I'm fine with that."

McCloughan would not say what the real story was, other than "just the truth."

"I'm not trying to protect him at all," McCloughan said. "He's going to have to prove himself out with us to be with us. But just to talk to him and hear his story -- because I wanted to know it, too. It was very important to me."

Team president Bruce Allen and coach Jay Gruden also met with Galette and spoke to people they know around the league about him. McCloughan would not say if he spoke with anyone from New Orleans but Saints coach Sean Payton told reporters that he did not talk to anyone from the Redskins.

But the Redskins feel good about their research regardless. McCloughan said in April that he did not want "bad guys" in his locker room, a stance he reiterated Sunday.

"We all have some kind of issue," McCloughan said. "We've all made mistakes or something. I don't want the repeat offenders. I don't want the guy that I know is not going to be a good guy and be in our locker room."

McCloughan also made it clear: His job is to compile the best 53 players for the roster. Galette, who has a combined 22 sacks the past two seasons, qualifies as a good talent.

"This is a 27-year-old pass rusher that has a lot of production that's had some issues in the past," McCloughan said. "He had other options, but for some reason we talked him into us being his first visit.

"I can tell you, when he left my room, the guy was crying, the guy was sweating. He was so excited to be a Redskin. That's passion. That's what I'm looking for: competitiveness, toughness. He has to walk the line and he knows that. If he doesn't, then he's gone."