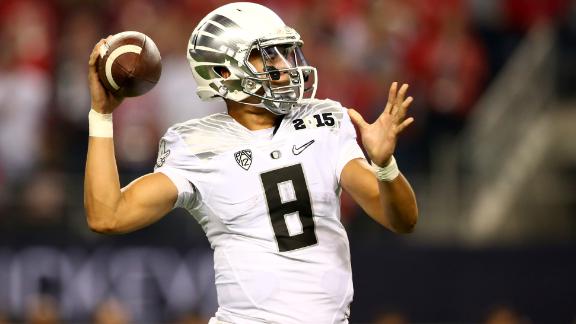 ESPN
By John Keim
PHOENIX -- The Washington Redskins gave Robert Griffin III the starting job a month ago. They might hand him more competition next month.

Redskins general manager Scot McCloughan acknowledged Tuesday that he would draft the best available player with the fifth overall pick -- even if it means taking a quarterback.

ESPN's John Clayton reported earlier this offseason that McCloughan would take Heisman Trophy-winning quarterback Marcus Mariota if he fell to No. 5. While Mariota might not get that far, McCloughan said his only goal is selecting the best player, regardless of position.

The Redskins also have quarterbacks Kirk Cousins and Colt McCoy on their current roster.

"No one will be handed a job from my standpoint," McCloughan said. "You have to earn it. That's what the NFL is about. I don't have any ties with any of the players. I didn't draft them. So I'm coming in -- prove it to me. Prove to me you deserve to be on the field. That's the way it should be in the NFL."

Griffin has served as the starter for most of his three seasons in the NFL, starring as a rookie before coming off a knee injury as a second-year player and struggling in the first year of coach Jay Gruden's system last season. He was benched last year but returned to the starting lineup after McCoy was injured with three games remaining.

After the season, Gruden said he wanted to have a competition. But at the scouting combine he announced that Griffin, the No. 2 pick in the 2012 draft, would be his starter. He reiterated that Monday, but said Griffin would have to play well to hold on to the job.

That doesn't impact McCloughan's decisions when it comes to the draft. He's trying to take what he learned in previous stops -- Green Bay, Seattle and San Francisco -- and apply them to Washington.

"I'm walking in from the outside saying, 'OK, I've been around a world championship team,'" said McCloughan, an executive with Seattle when the Seahawks won the Super Bowl. "I've helped build another one that made it there. I have a feeling what it's supposed to look like.

"What we did in San Francisco and Seattle, we understand we're not a real deep roster. So let's not focus on a certain position, let's focus on the best player."

Even if that means adding Mariota and creating what would be more intrigue to Griffin's Redskins career -- and probably reviving the circus atmosphere.

"You never have enough [quarterbacks]," McCloughan said. "When I was in Green Bay we had Brett Favre, who won three MVPs. Every year we drafted a Matt Hasselbeck and Aaron Brooks. It wasn't that early, but we still took quarterbacks."

Clayton: Redskins Will Take Mariota Early
Ryan Clark, Stephen A. Smith and Skip Bayless react to John Clayton's comments that the Redskins will select Marcus Mariota if he falls to the fifth spot in the draft; they also discuss QB Robert Griffin III's future in Washington.