Golden Tate: Who is Barry Church? 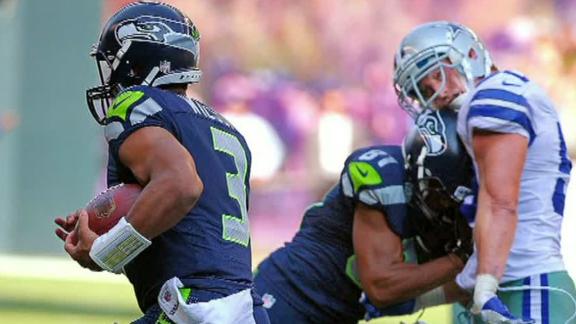 ALLEN PARK, Mich. -- When Detroit Lions wide receiver Golden Tate heard that Dallas Cowboys safety Barry Church had started talking about getting revenge on him for a hit on Sean Lee in 2012, Tate had to do some research.

Tate said Thursday he had no idea who Church was and has no prior history with him.

"Man, I don't know this guy," Tate said Thursday. "I just now heard of him yesterday from this incident. He's trying to get on the scene, I guess. We'll see."

Church made his comments Wednesday on his weekly segment on the radio in Dallas, saying Tate's hit on Lee was the "dirtiest shot I've ever seen" and that the Cowboys were going to try and get him back for the hit two years ago but "it will be within the rules, within the rules."

Tate was fined $21,000 for the hit in Seattle's 27-7 win against Dallas in 2012 when he hit Lee in the chest and chin with the crown of his helmet. The hit knocked Lee to the ground for several seconds before he got up.

Meanwhile, Tate celebrated the hit by flexing his biceps.

Tate had an opinion Thursday on the block from two years ago, including saying he appealed the fine and lost. He also said he appealed a similar block he had on Dwight Lowery a year later and that was overturned.

"Well, we didn't get a flag two years ago and I didn't think I should have been fined, either, but I was because I'm not going to get into that," Tate said. "It's crazy that the next year I had a very, very similar hit on against I believe Lowery, who also had a hit off for me this year, and they originally fined me and I appealed it, and they took the complete fine off of the same hit. So, you know, you guys can figure out the rest. ...

Tate said he believes Church trying to call him out could be a detriment to the Cowboys because it is one thing they are doing that isn't focusing on the wild-card matchup Sunday at AT&T Stadium in Arlington, Texas.

"I think we already have an advantage there that's taking away from the game, and I think that's selfish that another man is trying to get revenge for another man's problem, I guess," Tate said. "It's kind of weird. I've never been in this situation before, but the game is going to be played on Sunday and I think we're going to have a lot of fun."

And Tate didn't seem too worried about Church or any other Dallas players trying to tackle him or hit him because Church said they would do it within the confines of the NFL rules.

Tate has career highs of 99 receptions for 1,331 yards and four touchdowns this season.

"If you play within the rules, I have no problem with that," Tate said. "This game is a physical game. It's not the first time that people have, I guess, called me out.