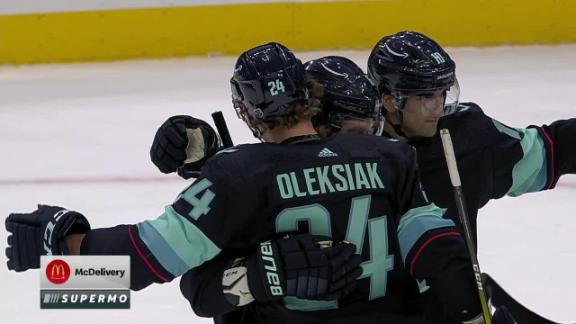 SEATTLE -- - Yanni Gourde and Adam Larsson scored in the first period to help Seattle a 3-0 win over the San Jose Sharks in the Kraken's final home game of the season on Friday night.

Victor Rask scored an empty-net goal in the final minute and Chris Driedger had 24 saves for his first shutout of the season - the Kraken's third.


"The Seattle fans came out. That's maybe the loudest I've heard this building," Driedger said. "Coming out with the building going crazy like it was, was pretty special. And to send it off at home to finish off the year is pretty cool."

Kaapo Kahkonen stopped 28 shots for the Sharks, who finished the season on a three-game losing streak.

It was the final game of the season for San Jose and the last home game for Seattle, two teams who were well out of the playoff hunt.

Although Seattle has had a disappointing inaugural season - and the third-worst record in the NHL - the home crowd was in a celebratory mood. Driedger made sure the fans got a positive end to the year, tallying the first shutout for the Kraken at home.

"Definitely when you go out for the third period, it's on the back of your mind. But you just try and play and make the next save," Driedger said. "I didn't want to count my chickens before they hatch in this situation, but it was nice to get it done."

The Kraken also gave the fans early reasons to cheer, taking a 2-0 lead in the first period.


"I think we came out of the gate pretty well. The first period was excellent," Gourde said. "Overall it was a great game for us and I'm super happy with the result."

Seattle rookie Matty Beniers earned an assist on Larsson's goal, giving him at least one point in eight of his nine career games, including all five home games.

San Jose's closest scoring chance came on a power play with about nine minutes to go in the second period, when Brent Burns' shot bounced off the crossbar.

"Those are pivotal moments in the game, and we just couldn't get it done today. I think you could probably see, it's not secret there wasn't a lot of guys who were sharp," Sharks coach Bob Boughner said. "Tonight was a team that I thought looked extremely tired and did not have a lot in the tank, and that's what happens."

After the game, the Seattle players came back onto the ice for a post-game celebration, including an awards ceremony. Jared McCann was named the team MVP and Gourde was named the fan favorite.

"If you look at the atmosphere out there, before the game, throughout the game, and even after - I don't think anybody left before we came back out for the presentations and the awards," Seattle coach Dave Hakstol said. "We've talked a lot about working to build the foundation in a lot of different areas. For sure, that connection with our city, our community, our fans is a real important one."

The Kraken won three of the four meetings between the teams. San Jose is the only team Seattle beat three times. ... Larsson is the eighth Kraken player to reach a career high in points, joining Will Borgen, Ryan Donato, Morgan Geekie, Karson Kuhlman, Kole Lind, Jared McCann and Carson Soucy. ... This is the third straight season the Sharks have missed the playoffs, the longest stretch in franchise history.

Sharks: San Jose's season is over.

Kraken: Finishes the season with a makeup game at Winnipeg on Sunday.