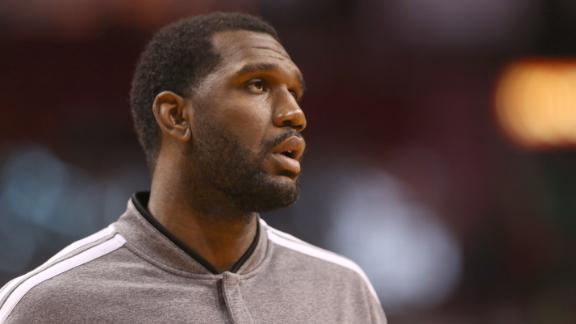 INDIANAPOLIS -- Former NBA No. 1 draft pick Greg Oden is out of jail following his arrest on battery charges for allegedly punching his ex-girlfriend in the face.

Police arrested Oden on battery charges early Thursday, alleging that he punched his ex-girlfriend in the face during a fight at his mother's suburban Indianapolis home.

The free-agent center, who played for the Miami Heat last season, was taken into custody at the home in Lawrence on two preliminary counts of misdemeanor battery.

Prosecutors plan to request a 72-hour continuance to give them more time to decide what, if any, formal charges Oden will face, she said.

According to a Lawrence police report, officers were called to the home at around 3:30 a.m. and found a 24-year-old woman on a sofa with a swollen, bloody face. A friend of the woman told officers that Oden had "punched her in the face."

The report says the injured woman was uncooperative and told officers she had fallen, but was unable to say when and where that occurred.

Oden told officers he and the woman had dated for about two years but split up two months ago. According to the report, he said he was arguing with his ex-girlfriend when "things got out of control" and he struck her as he swung his arms to try to break free of two people who were trying to hold him back.

One of Oden's relatives, who said she was awoken by the argument, told police that "every time the two visit and go out, there is an argument to follow."

Oden's agent, Michael Conley Sr., directed all questions to Oden's attorney, James Bell. In a statement, Bell said: "It would be inappropriate to comment at such an early stage of this case. The court will schedule a hearing and we will allow that process to play out."

The 7-foot Oden was a star at Lawrence North High School in Indianapolis and then played a season at Ohio State before the Portland Trail Blazers made him the top pick in the 2007 NBA draft.

Knee injuries have derailed Oden's professional career, and he didn't play from December 2009 until last season, when he averaged 2.9 points in 23 games for the Heat. He is currently without a team.