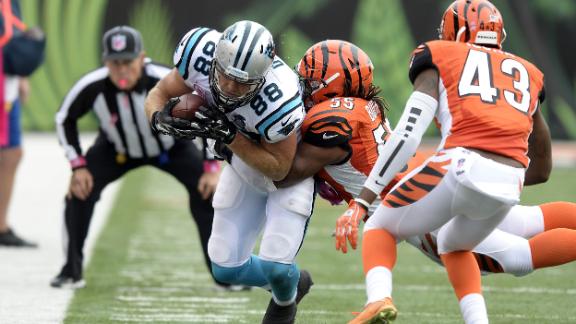 Video shows Burfict twisting and "cranking" the ankles of both players after they scored.

"Punishment needs to go beyond a fine," Olsen said on Monday. "Guys like that don't learn from that stuff. He's been fined a 100 times for head-hunting, and he did it to Kelvin [Benjamin] again. You watch the film; that's just what he is.

Burfict wasn't penalized for the ankle twisting, but the Bengals were penalized 15 yards for unsportsmanlike conduct on his hit against Benjamin as a defenseless wide receiver.

Coach Ron Rivera indicated he would send the league copies of the plays involving Newton and Olsen as coaches are allowed to following games.

"There is no place in the game for players doing extra stuff," Rivera said. "If that's what the league sees when I send in the tapes, then so be it. If not, then we'll go on from there."

Burfict declined to talk to reporters after the game, citing he was under concussion protocol even though he played and finished with 10 tackles.

When asked about Burfict's antics on Sunday, Bengals coach Marvin Lewis laughed it off and likened the accusations to professional wrestling.

"No, I don't have any comment on it," Lewis said laughing. "Ankle wrenching? That sounds like the WWF."

The first ankle incident came on Newton's 12-yard touchdown run in the third quarter. After Newton crossed the goal line, Burfict rolled over and twisted the quarterback's left ankle that was surgically repaired in March.

The second twist was more obvious as Burfict rolled over with Olsen's ankle between his legs following a 13-yard touchdown catch. Olsen said it was not the ankle he injured a week earlier against Chicago.

"It's pretty obvious that's not what this league is all about," Olsen said. "We understand that sometimes there's penalties and guys kind of go above and beyond the lines with some hits. That's all in the flow of the game and hard to avoid at times.

"But instances like that are so clearly premeditated, that he had in his mind if he had those opportunities that he was going try to attack not only guys' legs, but guys who were coming off ankle problems specifically ... there's no room for it."

Olsen stopped short of calling Burfict, who had missed two games this season with concussions, a dirty player.

"He's a hard-nosed player," Olsen said "His style of game is what he is. It's why he knocks himself out half the time."

Carolina punter Graham Gano was much stronger on Twitter:

Unbelievable that a player would intentionally try to hurt my teammates twice. I hope the NFL lays down the law hard. #Unacceptable

- Graham Gano (@GrahamGano) October 13, 2014Burfict has a history of being fined. He was fined $21,000 for hitting a defenseless receiver (James Jones) and $10,000 for striking tight end Ryan Taylor in the groin during a Week 3 game against Green Bay last season.

He also was fined $21,000 last season for hitting New York Jets wide receiver Stephen Hill, now a member of Carolina's practice squad, with the crown of his helmet.

"I'm not the punishment handout guy," Olsen said. "The league says they care about player safety. We'll find out what they really think."