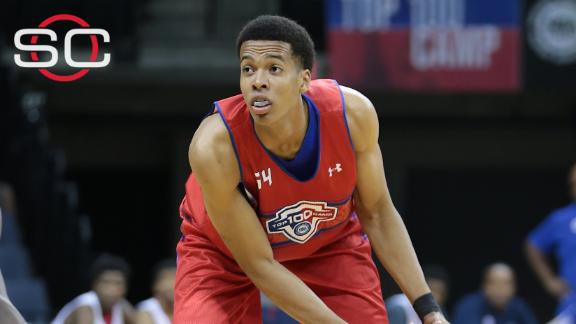 Kentucky's highly touted freshman big man Skal Labissiere has not been cleared to play by the NCAA, his guardian told ESPN on Wednesday.

"Not yet," Labissiere's guardian, Gerald Hamilton, told ESPN. "We're just trying to get everything squared away. They are asking a few questions.

"They haven't cleared him, but we're sticking with our faith," he added. "There's no real concern about anything from the Kentucky compliance people."

When asked about the specific reason Labissiere has yet to be cleared, Hamilton told ESPN he did not wish to comment.

Kentucky spokesman Eric Lindsey told ESPN the school will not confirm eligibility of its players until game-day but did say that Labissiere has been practicing with the team.

Multiple sources told ESPN that the NCAA was looking into Hamilton and his relationship with Labissiere, but Hamilton declined to comment on whether that was the holdup.

The 6-foot-11, 225-pound Labissiere, who is originally from Haiti, is considered a sure-fire lottery pick by NBA executives -- and was the No. 2-ranked high school player in the Class of 2015 by ESPN.

Labissiere arrived in the United States in 2010 from Haiti after the devastating earthquake that hit the country. Hamilton has moved Labissiere from Evangelical Christian School to Lausanne Collegiate -- both around Memphis, Tennessee -- where he was ruled ineligible to play. Labissiere wound up playing for Memphis-based Reach Your Dream Prep, which Hamilton formed to give the talented big man somewhere to play for his senior campaign.

Kentucky's season opener is Nov. 13 in Lexington against Albany. Labissiere isn't the only elite prospect awaiting NCAA clearance. Kansas freshman forward Cheick Diallo, who was ranked No. 7 in the ESPN 100, is practicing with the Jayhawks but has not been granted NCAA eligibility to play in games.

Diallo, a Mali native, attended Our Savior New American School in Centereach, New York, for three years. OSNA is under review by the NCAA, but 2015 graduates Damon Wilson (Pittsburgh) and Davon Dillard (Oklahoma State) were recently cleared to play.

"We hope in two weeks, maybe three weeks, before we have a definite answer," Kansas coach Bill Self said in a radio interview Monday.

Kansas also opens its season on Nov. 13, against Northern Colorado.