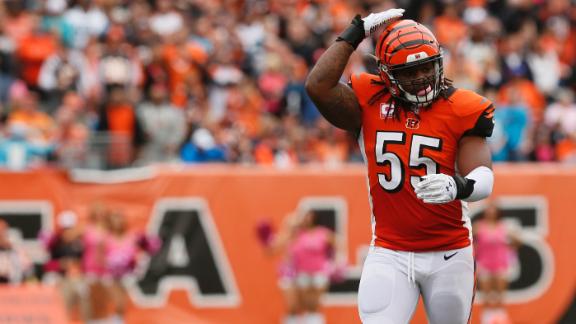 CINCINNATI -- Bengals defensive coordinator Paul Guenther says he has reached his wit's end when it comes to linebacker Vontaze Burfict's knack for lowering his head whenever he tackles an opposing player.

"He does us no good sitting on the sideline after five snaps every week," Guenther said Wednesday. "It does us no good. It does us more harm than good. So he's got to learn how to do [tackle better] for him and the team and everybody involved."

The head-down tackling style appears to have played a role in some of the head and neck injuries Burfict has had this season. He has played in only four of the Bengals' six games and has left each of those four at some point after dealing with the aforementioned ailments. He has finished only game, the Bengals' Week 6 contest against Carolina, which he left briefly after being diagnosed with "a hit to the head."

Burfict has been part of 149 snaps this season. After six games last year, he already had 388 plays under his belt. His production in what ended as a Pro Bowl season was much greater too. He had 61 tackles, a sack and an interception by this point in 2013. This season, he has 22 stops.

The undrafted, third-year linebacker was recording his fourth tackle of Sunday's game against the Colts when he hurt his neck. While bringing down Indianapolis quarterback Andrew Luck, Burfict suffered what coach Marvin Lewis called a "cervical sprain." On that tackle, just like the one that caused the first concussion Burfict received, his head was down.

When Burfict left the game after the first quarter, the Bengals had to move reserve Vincent Rey -- who already was starting because of injuries to two other linebackers -- to Burfict's spot. All the play-calling and formation-setting duties then fell on Rey's shoulders. While he finished with 16 tackles and did an admirable job considering he was playing linebacker alongside a rookie and second-year player, Rey still wasn't Burfict.

"I've said this a million times: He's my quarterback on the field," Guenther said of Burfict. "I communicate with him, 'Hey, tell the corner this.' And he knows exactly what I'm thinking. Being his [former] position coach, I've trained the guy. It's easier when you have a guy that you've trained who can understand that these are the ins and outs of what I'm thinking about. He settles the group down when he's playing. He brings energy."

Guenther was the Bengals' linebackers coach before being elevated to defensive coordinator after Mike Zimmer left for Minnesota's head-coaching job this offseason.

Burfict's tackling techniques drew criticism last week from Panthers tight end Greg Olsen, who panned Burfict's aggressive style. Olsen was originally angered by charges he and other Panthers had levied that Burfict twisted their ankles after plays had ended and had called on Burfict to be suspended. Ultimately, Burfict was handed a $25,000 fine by the league.

"He's a hard-nosed player," Olsen said. "His style of game is what he is. It's why he knocks himself out half the time."

Guenther knows it will be difficult for Burfict, who had an NFL-leading 171 stops last season, to completely change a style of tackling that he has employed since high school. Still, he has to just do it, Guenther said.

"Change your throwing motion, change your tackling form, whatever it is, you've got to do it," said Guenther, whose team has gone 0-2-1 since winning its first three games. "It's not the easiest thing, I'll tell you that. But he's got to understand the ramifications of it."