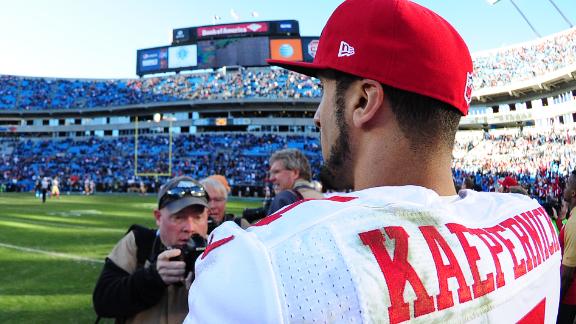 "At some point there needs to be a resolution to this scenario," Harbaugh said. "The only victim in Colin's case is Colin's reputation."

Kaepernick, along with 49ers receiver Quinton Patton and Seattle Seahawks wideout Ricardo Lockette, is part of an ongoing investigation in Miami for what police have described as a "suspicious" incident. Police have yet to name any of the three a suspect in a criminal case.

Harbaugh appeared to take issue with some public perception of the case and how it has been handled in the media.

"Looking at Colin Kaepernick's situation, at some point there needs to be a resolution to some of this jump-the-gun, witch-hunt scenario we're seeing," Harbaugh said at the 49ers' facility after a workout for local draft prospects. "I've seen one side reported. I've heard the other side and feel very good there'll be a good resolution, and hopefully a just one, too. I hate to see his reputation be the victim.

"Winston Churchill had a great quote: 'A lie will get halfway around the world before the truth has a chance to put on its pants.'"

"To say there's no concern would be a misrepresentation," Baalke said of the investigation. "We're always concerned, but let's let this thing play out and see where it goes."