Harvick: Tracks must be proactive 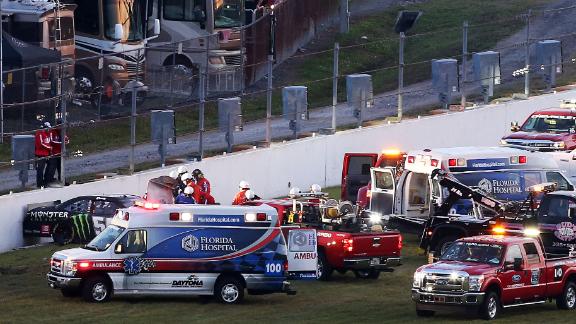 DAYTONA BEACH, Fla. -- Kevin Harvick, who criticized Daytona International Speedway last year for still having exposed concrete walls, characterized himself as "a dot" that did not get a reaction following his 2014 accident and said Sunday that tracks need to be more proactive.

Daytona International Speedway president Joie Chitwood pledged that the entire oval's inside and outside walls will have the steel-and-foam energy-reduction barrier for future events following Kyle Busch suffering a broken right leg and broken left foot in a crash Saturday during an Xfinity Series race.

"Just like we did with Dale Earnhardt, Kyle Busch, one of our sport's biggest stars, is out and not being able to race because of the lack of attention that it takes for the safety on these superspeedways," Harvick, the reigning Sprint Cup champion, said Sunday morning before the Daytona 500. "Instead of being proactive, the track was reactive.

"Fortunately, it's not a situation of a magnitude of Earnhardt's, but it's still a wake-up call in my opinion to make sure we do things right."

Earnhardt, a seven-time Cup champion, died in a last-lap crash in the 2001 Daytona 500. On Saturday, Busch slammed head-on into a concrete wall on the inside heading into Turn 1 in a spot close to where Harvick hit last year.

"It's a reaction from the racetrack unfortunately," Harvick said. "I hit the same wall a little further up last year at this particular race and kind of voiced my opinion, and unfortunately I was just a dot on the chart and there was no reaction.

"Now there's a reaction from the racetrack. Hopefully this is a lesson learned. You don't want to have a reaction. Racetracks have to be proactive and ... they have to look ahead and look for accidents that might happen."

NASCAR chairman Brian France told the drivers at their prerace meeting that NASCAR was "not proud" of what happened Saturday.

"SAFER barriers, and any area that we work on particular to safety, if it's not up, we'll get it up," France said. "That's our commitment going forward on that issue."

NASCAR mandated SAFER barriers in the turns of all ovals by the 2005 season. Since then, tracks have added them primarily after wrecks hit walls not covered by the barrier, which uses a steel front with foam in sections between the steel and concrete. DIS added 2,400 feet of the barrier last year to the outside walls but had not changed the inside wall leading into Turn 1.

Both Harvick and JGR owner Joe Gibbs praised NASCAR's safety initiatives in the past 14 years. After the death of Earnhardt, NASCAR began requiring head-and-neck restraints and began taking a more thorough look at seats and restraining devices.

Earnhardt's death followed a year where three other drivers -- Adam Petty, Kenny Irwin Jr. and Tony Roper -- died of similar neck injuries. It wasn't until Earnhardt died that there was a significantly increased focus in NASCAR to prevent neck and other injuries.

DIS is two years into a three-year, $400 million grandstand renovation project. Harvick had been critical of the track pouring so much money into improving the grandstands while still having exposed concrete walls.

It costs approximately $500 per foot to install the barrier, and Chitwood didn't have an approximate cost Saturday night. NASCAR's sanction agreements dictate that the tracks must follow NASCAR direction for safety improvements to keep NASCAR races as well as let NASCAR know of any significant changes to the facility.

"We will accelerate those talks with the tracks," NASCAR executive vice president Steve O'Donnell said Saturday about discussions over additional SAFER barriers. "We want this sport to be as safe as possible for not only our drivers, but everyone who participates in the sport and the race fans as well."

Gibbs wouldn't call for SAFER barriers in all areas and credited the safety enhancements in the past decade for keeping Busch's injuries limited to below his knees.

"NASCAR certainly knows the most important asset we have is our drivers," Gibbs said. "I really applaud the fact that we have had some of the wrecks and everything that we have in our sport and yet the safety factor has really been outstanding in some of the improvements that we've made.

"This will be a learning experience for everybody, and I'm sure the tracks will be part of that. ... We probably have reached the point with everything to do with the walls, we'll probably have those protected."

Safety Concerns In NASCAR
Ricky Craven discusses the concerns of NASCAR drivers and the necessity to have SAFER barriers and possibly eliminate the grass on the infield.