Hawks' Thabo Sefolosha has broken leg, out for season 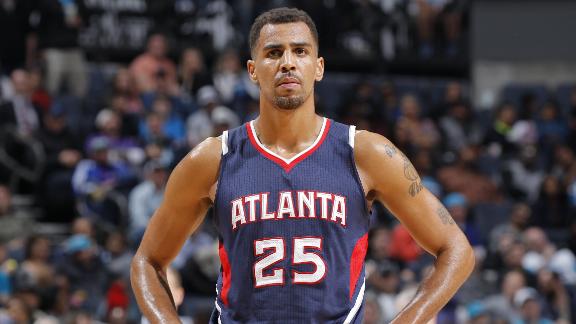 ESPN
By Kevin Arnovitz
ATLANTA -- Hawks forward Thabo Sefolosha has been diagnosed with a fractured fibula and ligament damage and will miss the remainder of the regular season and playoffs, the team said Thursday.


Sefolosha was hurt Wednesday morning outside a Manhattan night club, where a police report states he was resisting arrest. Sefolosha was arrested along with teammate Pero Antic for interfering with efforts of local police to set up a crime scene following the stabbing of Indiana Pacers forward Chris Copeland.

The pair of Hawks reserves were released on their own recognizance after arraignment Wednesday afternoon. Neither played in the Hawks' 114-111 win over the Brooklyn Nets on Wednesday night.


"There's a legal process underway, therefore, I cannot comment, other than to state that I believe in Thabo's innocence completely and am behind him 100 percent," Guy Zucker, Sefolosha's agent, said. "It's an incredibly difficult time for Thabo, his family and the Atlanta Hawks, considering the recent events and the seriousness of his injury."


Sefolosha and Antic released a statement though the team Wednesday night that said: "As members of the Atlanta Hawks, we hold ourselves to a high standard and take our roles as professionals very seriously. We will contest these charges and look forward to communicating the facts of the situation at the appropriate time. We apologize to our respective families, teammates, and the Hawks organization for any negative attention this incident has brought upon them. We are unable to provide further comment as this is an ongoing legal matter."


Sefolosha, who signed a three-year, $12 million contract with the Hawks last summer, recently returned from a 23-game absence after suffering a right calf strain Jan. 30 in the midst of the team's19-game winning streak.


A defensive specialist who started at shooting guard in Oklahoma City for 355 of his 356 games with the Thunder, Sefolosha has been crucial to the Hawks' defensive improvement this season. He boasts the best defensive rating on the team by a considerable margin, and ranks sixth out of 86 qualified small forwards in defensive real plus-minus.


On the offensive end, Sefolosha is averaging 5.3 points and 4.3 rebounds with an effective field goal percentage of 46.8 percent in 18.8 minutes over 52 games.


Information from ESPN.com's Marc Stein was used in this report.