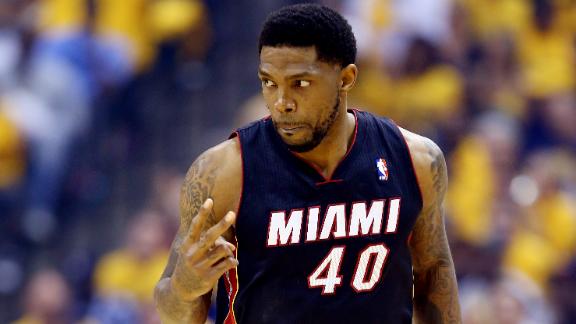 The team did not announce terms of the deal, but sources told ESPN.com it is for the room midlevel exception of two years and $5.5 million.

"Udonis Haslem has been a fixture in Miami over the last 11 years," Heat President Pat Riley said. "He's a team player, an encompassing all-purpose player that would play just about any position or role in order to win. It's been such a privilege and honor to have him with the organization and I'm so happy that he decided to come back."

Haslem had opted out of a contract that was scheduled to pay him $4.6 million this season. The Heat were able to restructure their roster by giving him a new deal.

Also, Shabazz Napier signed his rookie deal with the Heat.

Napier's deal was finalized Friday, hours before Miami's final game of its summer league schedule. The point guard will make about $1.2 million this season after being selected with the No. 24 overall pick in last month's draft.

"Growing up, this is what you want to do," said Napier, who sat out the game against Cleveland. "You want to be part of a great organization. It's always great to have that extra feeling of relief. I told my family about it and it's something we all will cherish."

Napier, who led Connecticut to this past season's NCAA championship, becomes the 12th player either signed or committed to the Heat for next season.

"I spent a great deal of time studying him in preparation for the draft and we liked his qualities: his toughness, his competitiveness, his ability to play bigger in bigger moments," Heat coach Erik Spoelstra said earlier this week after watching Napier during the Las Vegas summer league. "He has a very good feel for the point guard position but can also play off the ball. He will be a shooter in this league."