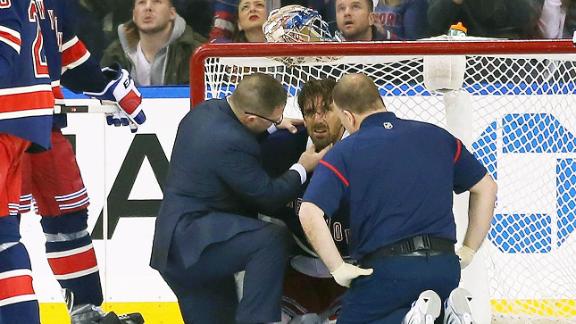 New York Rangers goaltender Henrik Lundqvistwill be out of action for at least three weeks, the result of a vascular injury suffered when he was struck in the neck by a puck last weekend.

The Rangers made the announcement Friday.

With backupCam Talbot in goal for Lundqvist on Thursday, the Rangers beat theBoston Bruins3-2. Rangers coach Alain Vigneault said after that game that Talbot would start Saturday if Lundqvist was unavailable.

Lundqvist was struck byCarolina Hurricanescenter Brad Malone's shot in the second period of last Saturday's game after Rangers defensemanRyan McDonagh's stick pushed up Lundqvist's mask. He shook that off, stopped 31 shots overall, and led the Rangers to a 4-1 win.

The Rangers are 30-15-4 and in third place in the strong Metropolitan Division, and sixth overall in the Eastern Conference.

Lundqvist Out At Least Three Weeks
Katie Strang discusses Rangers goaltender Henrik Lundqvist's injury, which is expected to sideline him at least three weeks, and the impact it will have on the team.