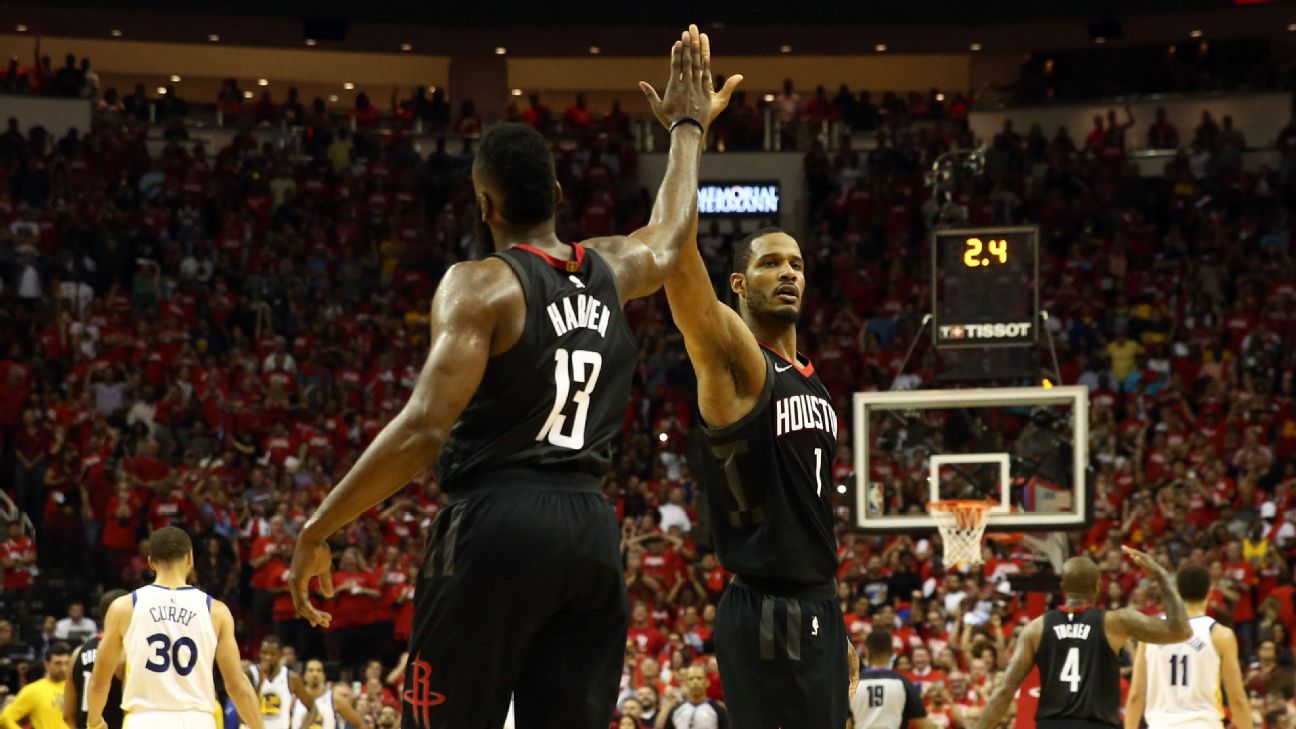 After enduring a wretched first half offensively that saw their superstar backcourt struggle mightily from the field, the Houston Rockets found their stroke and held off the Golden State Warriors 98-94 in Game 5 of the Western Conference finals.

The Rockets are now one win away from being the first team other than the Warriors to represent the West in the NBA Finals since 2014.

Down 96-94, the Warriors had an opportunity to go full court out of a timeout with 6.7 seconds remaining to tie or take the lead but squandered the possession when Draymond Green couldn't handle an advance pass from Stephen Curry. The ball squirted away in the direction of Eric Gordon, who was immediately fouled and sank the two free throw attempts to seal the game.

Neither James Harden (4-for-13 from the field in the first half) nor Chris Paul (0-for-7) could find his stroke prior to halftime, with the two combining to miss all 10 of their 3-point attempts.

But ever resourceful, Harden and Paul each discovered a rich source of production following intermission -- the free throw line for Harden and the 3-point line for Paul. Paul, who left in the closing minute with a hamstring injury, finished the night with 20 points, while Harden scored 19 points in total on 5-for-21 shooting (0-for-11 from 3-point range).

Rockets coach Mike D'Antoni again opted for a short, seven-man rotation, and the supporting cast for Houston helped bolster its struggling leaders in the first half and maintained its poise in the second. Center Clint Capela proved once again Houston can play big even when the Warriors downsize.

Capela provided crucial rim protection (a pair of blocks and countless contests) while dominating the glass (14 rebounds), and capitalized on the offensive end (12 points on 5-for-6 shooting), whether it was on the receiving end of a lob or a duck-in.

While Harden and Paul struggled, PJ Tucker held down the fort for Houston in the first half. Tucker, who carved out a place for himself in the NBA as a gritty, undersized power forward with proficiency from long range, emerged as an essential part of the Rockets' 65-win campaign.

His eight first-half points -- including a pair of 3-pointers -- and versatile defense were key contributions when shots weren't falling for the Rockets' backcourt.

Gordon, who led Houston with 24 points, had his own issues from the field in Game 5 but drained perhaps the biggest shot in the game for Houston, a long 3-pointer off a dish from Harden with 1:21 remaining in the game, to put the Rockets ahead four points -- a nice capper to a 6-for-15 evening.

For all the emphasis on Harden's brand of iso ball in the series, Kevin Durant's desire to work one-on-one was among the more pronounced features of the Warriors' offense Thursday night. He scored a game-high 29 points on 8-for-22 shooting from the field and 10-for-10 from the line, with a selection of dribble-attacks (emphasis on the dribble), pull-up and turnaround jumpers and a trio of 3-pointers.

The Warriors simply never slipped into a rhythm and were far less reliant on their trademark movement and crisp passing game. Turnovers have long been a vulnerability for the Warriors, and in Game 5, they racked up 16 of them.

They now face elimination in consecutive games, as they did in 2016 when they fell behind to Durant's Oklahoma City Thunder 3-1 in the conference finals before rallying with three straight victories.

Whether the Warriors come back in 2018 will depend in some part on which playbook they draw from -- the 2016 Warriors or the 2016 Thunder.

CP3, Rockets take down Dubs
Chris Paul comes alive in the second half and the Warriors can't convert late, going down 3-2 to the Rockets.