How dangerous are the Sharks? 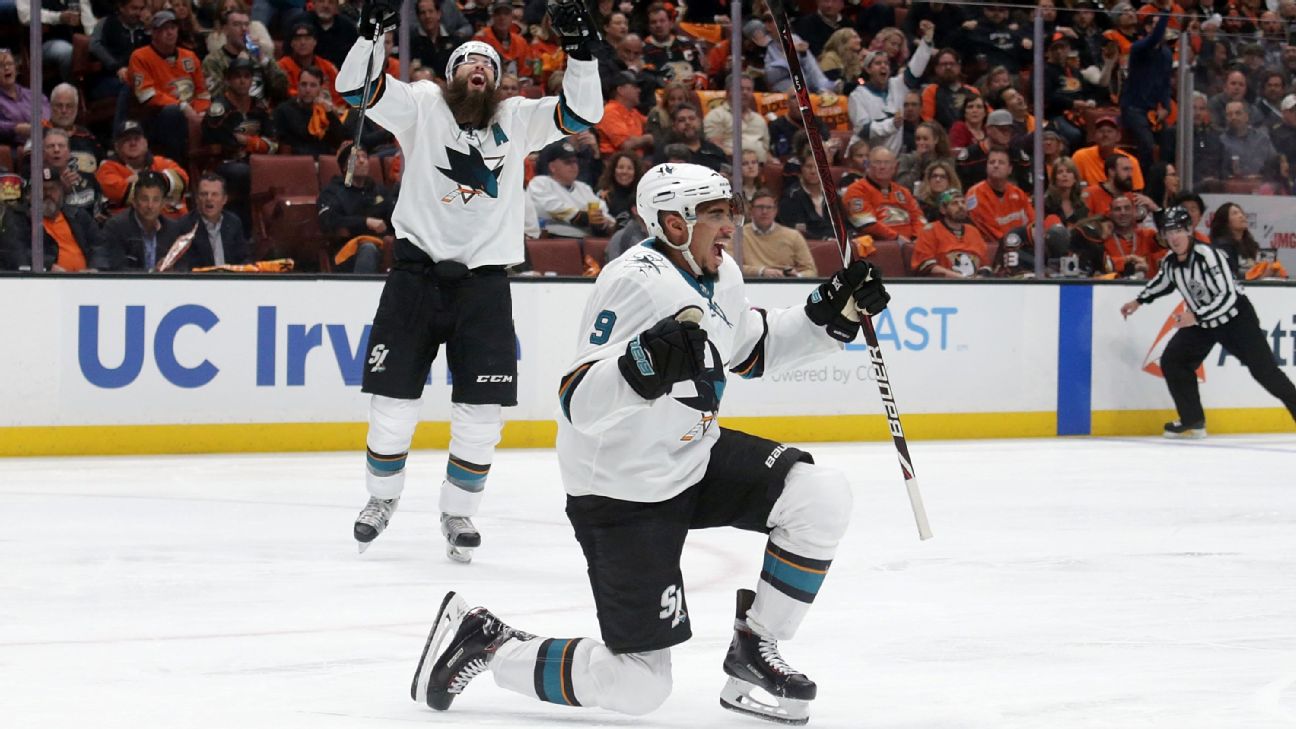 On paper, the San Jose Sharks did not appear to be clear-cut favorites over the Anaheim Ducks in the opening round of the playoffs.

San Jose ranked 17th in even-strength goal differential during the regular season, while Anaheim was sixth. The Ducks posted the second-best even-strength save percentage in the NHL; the Sharks had the fourth worst. Finally healthy, the Ducks brought in their full squad of stars led by Ryan Getzlaf, Corey Perry and Ryan Kesler, while the Sharks faced an uphill climb without No. 1 center and future Hall of Famer Joe Thornton, out since January with a knee injury.

None of that mattered.

The Sharks blew the doors off the Ducks, sweeping the first round and outscoring their opposition 16-4 in the four games.

Where was the disconnect? Did we underrate the Sharks? Are they playing better hockey now than their regular-season numbers would suggest? Will San Jose's dominance carry over to its matchup with the Vegas Golden Knights? And how seriously should we take the Sharks as Stanley Cup contenders?

Evander and the forwards

A cold streak before the deadline combined with past off-ice incidents in Buffalo and several reported issues with teammates and staff in Winnipeg added up to lower value than normal for a gifted offensive player with size and toughness.

Once skating for San Jose, Kane made an instant impact, scoring eight even-strength goals and adding five assists in 17 games. His 5-on-5 scoring rate of 2.96 points per 60 minutes was nearly double that of his first 61 games in Buffalo. From the day San Jose acquired Kane until the end of the season, the Sharks scored the fifth-most even-strength goals in the NHL.

Against the Ducks, it became clear that Kane wasn't just hitting a hot streak. He is simply a good fit in San Jose. In all situations, he produced three goals and one assist in the four wins and put 21 shots on goal.

Outside of his individual impact, Kane's presence allows head coach Pete DeBoer to spread out the talent on the wing more than he could before the trade. With Kane alongside Joe Pavelski and Joonas Donskoi, 21-year-old forward Timo Meier is pushed down into a third-line role.

The Sharks' 2015 first-round pick scored 21 goals in his first full season, adding depth rather than taking on a heavy load, and he could help San Jose match up much better with Anaheim's third line, centered by Adam Henrique. In 21 minutes sharing the ice, Meier's line with center Chris Tierney and winger Kevin Labanc held the Ducks scoreless and created 10 scoring chances to Anaheim's six.

If Thornton returns, DeBoer will likely slide Logan Couture down to the third line, giving the Sharks a much stronger look than when they entered the postseason.

Whether the Sharks have enough firepower up front to get past the Golden Knights and beyond remains questionable. Thornton hasn't played since the end of January. It's hard to say how effective he can be against the speedy Vegas club.

Kane's size and speed are made for the postseason, but the power winger has also been riding a hot streak since joining the team that could run cold eventually. Kane had an 11.3 percent shooting percentage in the regular season and 14.3 percent in the first round. Since 2013-14, Kane has scored on just 8.7 percent of his shots.

The entire Sharks roster could slip back offensively as the playoffs go on. Against the Ducks, San Jose produced the second-highest even-strength shooting percentage (11.5 percent) of any team and scored on 22.2 percent of their high-danger chances. During the regular season, the Sharks shot 7.6 percent at even strength, and scored on scored on 12.6 percent of high-danger attempts, according to Natural Stat Trick.

Aside from Pavelski and Couture, the Sharks' roster is stacked with inconsistent offensive players. Within his past three seasons alone, winger Mikkel Boedker has fluctuated between 26 and 51 points for a full season. San Jose's second-line winger also had a minus-4.6 percent relative Corsi for percentage this season.

Donskoi, a solid two-way forward, put only two shots on net in the four games versus the Ducks. He scored 14 goals in the regular season after managing only six two seasons ago.

So despite a dominant Round 1, the Sharks will likely need the presence of their legendary center -- even if he isn't at 100 percent -- in order to challenge deeper teams with more consistent scoring wingers.

The D stepped up

When San Jose's defense corps is at its best, it matches up with any of the league's best blue lines. The biggest question heading into Round 1 was whether Paul Martin, 37, still had enough in the tank to play big minutes of his smart, simple brand of hockey. Martin is the perfect partner for Brent Burns, whose value is connected to his ability to jump up into the play and create offense. Against the Ducks, Martin and Burns looked like the top pair that drove the Sharks to the Cup Final two years ago. In 52 minutes together, they created 29 scoring chances for (per Natural Stat Trick) and allowed 25 against. When adjusting for the fact that the Ducks were playing from behind the whole series, those numbers look even more impressive.

Having a competent third pair in the playoffs isn't absolutely needed to win -- as the Chicago Blackhawks proved in 2015 -- but it certainly doesn't hurt. Brenden Dillon was on the ice for a 4-0 goal margin against the Ducks. He and partner Dylan DeMelo faced Adam Henrique's line for 19 minutes in the series, taking pressure off the top two pairs.

The success of San Jose's defense in the opening round speaks to the Sharks' overall theme. Burns had a solid regular season but was on the ice for 65 even-strength goals against and only 54 for his club. Martin was sent down to the AHL early in the season, and the Vlasic-Braun pair both had negative relative Corsi ratings. But when each player was needed most, he stepped up. Whether that can hold up over three more series is yet to be seen.

You would be hard-pressed to find a better example of the unpredictability of goaltending than the opening-round performance from Sharks netminder Martin Jones.

During the regular season, Jones sputtered at times, finishing the season with a .915 save percentage. In his past two seasons, he has been just 1.4 goals saved above average (GSAA), according to Hockey Reference. But when the lights are their brightest, the 28-year-old goalie has been at his best.

In 2015-16, Jones made a name for himself by guiding the Sharks to the Stanley Cup Final. Of his playoff 24 starts, he gave San Jose 14 quality starts (two goals or fewer or a save percentage above league average) and finished the postseason with a .923 save percentage. This spring, he opened the playoffs by stopping 128 of 132 shots against the Ducks.

Overall, Jones has a .931 career playoff save percentage in 36 games and 12 straight postseason quality starts.

It's nearly impossible to predict whether a goalie will continue to ride a hot streak or fall off the side of a cliff, but the Sharks' netminder likely will see some tougher times unless his team does a better job of preventing scoring chances.

While the Ducks scored only one goal in high-danger areas, they took 37 high-danger shot attempts, the third most of any team in the playoffs.

Jones may have carried on his tradition of terrific playoff performance into this run, but it's very unlikely he will sustain excellence if his team gives Vegas that many opportunities.

Facing Vegas and beyond

If you focus only on regular-season statistics, the Golden Knights should be the favorites heading into this matchup. But if you look at the Sharks' recent play and Vegas' scoring troubles in Round 1, a Sharks series victory appears more plausible.

This series likely will be decided by whether Vegas' scorers find their regular-season form. In their first 82 games as a franchise, the Golden Knights scored 206 even-strength goals, good for third in the NHL. The good news for Gerard Gallant's group is that they created the second-most high-danger shot attempts in the first four playoff games, but the Knights ran into goalieJonathan Quick at his best.

Vegas has a deep group of scoring forwards with five players over 20 goals and several rising star defensemen like Shea Theodore -- who was on the ice for 27 high-danger shots for and only five against -- and former Capital Nate Schmidt. And goalie Marc-Andre Fleury made his own case for the first round's best goalie, with a .977 save percentage.

Overall, the Golden Knights look like the more complete team. Then again, so did the Ducks. If the Sharks hold Vegas' dynamic group of scorers down, then it will be time to believe they have a chance against one of the two best teams in the West, Nashville or Winnipeg (their likely opponent if they make the Western Conference finals). But for now, they are still not a great bet to reach the Stanley Cup Final.
Report a correction or typo
Related topics:
sportsespn2018 nhl playoffshockey2018 stanley cup playoffsvegassharksnhl scoressan jose sharksmatthew collerstanley cupnhlnhl statsgolden knightsnhl schedulenhl rankings
Copyright © 2020 ESPN Internet Ventures. All rights reserved.
More Videos
From CNN Newsource affiliates
TOP STORIES