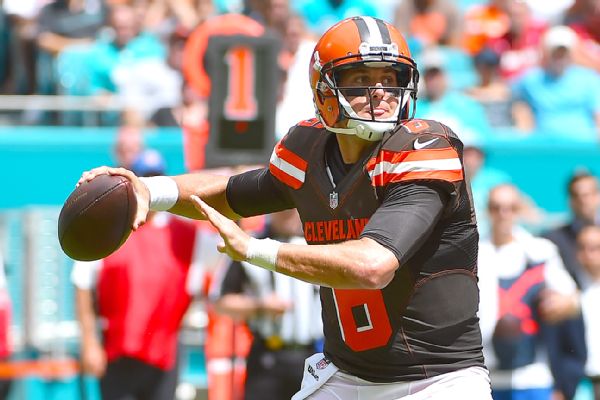 BEREA, Ohio -- Cleveland Browns quarterback Cody Kessler will practice this week with bruised ribs on his left side with the intention of playing against the Titanson Sunday.

"That's the plan," Kessler said before Wednesday's practice. "My goal, obviously, is to be ready to go on Sunday."

Coach Hue Jackson may have a decision to make, because veteran Josh McCown also will practice for the first time since fracturing his collarbone Sept. 18 against Baltimore. Like Kessler, McCown said he was practicing with the intention of playing.

"That's obviously coach Jackson's decision," Kessler said. "He makes the call on all those. But I'm going to continue to keep the same process and continue to prepare like I have the last few weeks."

Injuries are becoming a regular staple of the Browns this season. The team announced left guard Joel Bitonio, who had been playing very well alongside Joe Thomas,would miss extended time with a left foot injury.

Kessler hurt his ribs late in the first quarter of Sunday's 33-13 loss to New England when he was smothered by linebacker Dont'a Hightower.

When he landed Kessler thought his shoulder was injured. He said he immediately felt pain and had shortness of breath. However, he said he felt better as the day progressed on Monday. Rehab with "a ton of ice" and working on motion also has helped, he said. Kessler said he felt "a lot better" than he did on Sunday.

"It's not a whole lot of movements that make it too sore," he said, "but throwing is obviously one of them."

Kessler was the Browns' third starting quarterback this season. Robert Griffin III started the opener, but broke his coracoid bone. McCown started the second game, but fractured his collarbone. Kessler started three games, but hurt his ribs. Charlie Whitehurst replaced him, but hurt his knee and was released with an injury settlement. Kevin Hogan was promoted from the practice squad Tuesday.

Thomas has been through 18 starting quarterbacks since he joined the Browns as the draft's third overall pick in 2007. He quipped that at least he won't have to introduce himself to the quarterback on the field in Nashville. That happened in the season finale in 2012, when the team signed Josh Johnson a few days earlier and he had to play the final few plays when starter Thad Lewis was injured.