In a thriller, Celtics keep streak alive against defending champs 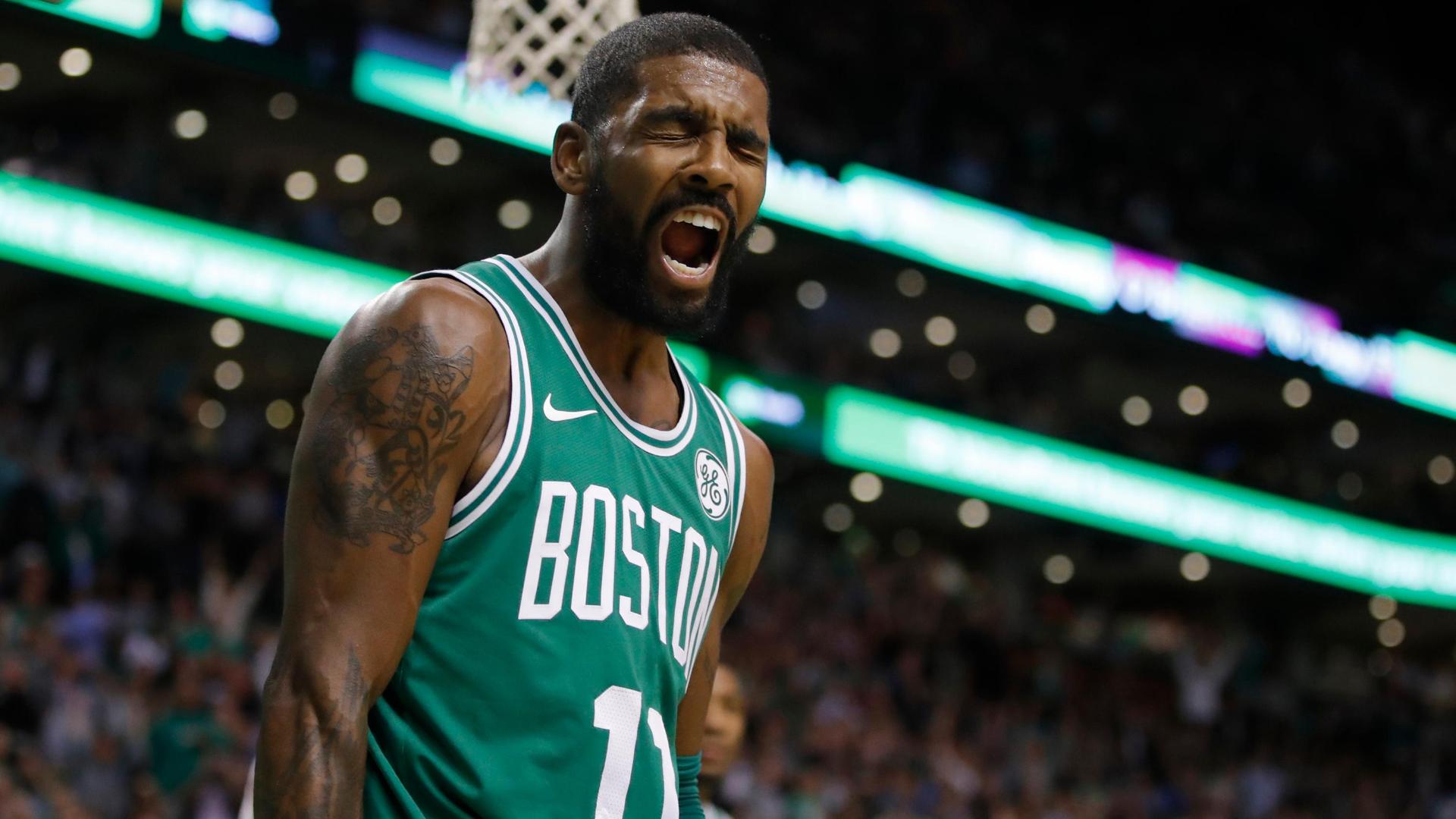 BOSTON -- Golden State Warriors coach Steve Kerr arrived to his pregame media session in Boston on Thursday night to find an overflow throng of media on hand for a battle of streaking NBA conference leaders.

Asked about the significance of the matchup, Kerr deadpanned, "Huge game. Huge. The fate of the universe rests upon the results of tonight's Celtics-Warriors matchup."

TD Garden buzzed with a playoff-like intensity throughout the night, including when an injured Gordon Hayward sat with assistants behind the Boston bench in the first half, drawing an ovation when he was shown on the Jumbotron, but especially as the Celtics twice rallied from double-digit deficits while pushing the defending champions for the full 48 minutes.

And it was Kyrie Irving, ditching his protective face mask early in the third quarter despite playing with a facial fracture, who fearlessly attacked the basket in the final minute. His free throws put Boston out front for good in a 92-88 triumph.

The Celtics have now won 14 straight games since starting the season 0-2 in the immediate aftermath of Hayward's season-ending ankle injury. The Warriors had their seven-game winning streak snapped.

Asked about ditching the mask, which he had sported for a mere six quarters, Irving said: "I knew the decision I was making. I knew the health risk I was taking. It's my life."

Celtics coach Brad Stevens said he asked team trainer Art Horne if it was OK for Irving to play without the mask. Horne informed him it was fine but it also wasn't recommended.

Especially not when Irving repeatedly attacked the basket in the fourth quarter, running directly at the white jerseys in front of him without fear of aggravating his injury.

"[The mask was] just taking a little bit of my vision away, and going against a team like that that's just smothering you everywhere you're going, it's just like -- I just kept seeing so many bodies in front of me, I was just trying to see the open pass," Irving said. "I'm coming off [screens], and those guys were just doing a great job -- Golden State -- they were just trapping me off of every pick-and-roll, every pin down. So I was coming off, I could only see what was in front of me, and then I had to make quick decisions, and it just wasn't fluid, so just took it off."

Second-year forward Jaylen Brown scored a team-high 22 points and essentially willed Boston back into the game on two different occasions.

The Celtics don't win this game without Brown's efforts.

"[Irving] gave me the game ball and said this one was for Trevin," Brown said. "That meant a lot to me."

A couple hours before tip-off, Brown wasn't even sure he'd play in Thursday's game.

The Celtics trailed by as many as 17 in the first half, but even as Boston's offense struggled mightily (30.2 percent shooting overall through two quarters), its defense gave it a chance to rally by holding the Warriors without a field goal over the final 5:25 of the half. Brown gave the Celtics a jolt of energy late in the half, his hustle on display on both ends, and Boston clawed within five at the intermission.

Unfazed, the Warriors pushed their lead back to 17 seven minutes into the third quarter. This time Boston embarked on a 19-0 run andJayson Tatum's baseline drive put the Celtics out front 68-66 in the final minute of the frame. The Warriors had more turnovers (five) than field goal attempts (four) during Boston's four-minute burst. Brown scored 10 points during Boston's run.

Stephen Curry labored through 3-of-14 shooting and finished with just nine points. Kevin Durant scored a game-high 24 points on 9-of-18 shooting for the Warriors. Golden State didn't help itself with foul trouble that helped Boston shoot 38 free throws, twice as many at the Warriors on the night.

The Warriors, the league's top-ranked offense, did come away impressed by Boston's league-leading defense.

"It was a great game for us to understand that it's not only going to be 2017 NBA, 125-121," Kerr said. "You're going to run into teams like this that are really physical and tough. That's why we harp on every box out, every foul, silly fouls, all those things add up when you play a lower-scoring game. That was the key tonight. Too many mental mistakes. Too many fouls."

Added Durant: "[The Celtics' defense was] aggressive. They were overplaying and being physical, but for the most part we got what we wanted. When we put teams in the bonus with nine minutes to go in the quarter, it's hard to play defense and keep our pace up that way."

Having Hayward around the team gave Boston some extra energy as well.

"Just being on the bench, seeing him, getting his knowledge of the game, you can tell that he misses it," Irving said. "I know he's standing strong to be able to be there and understand that his support goes a long way and we're happy to have him here." Celtics win 14th straight in potential NBA Finals preview
Boston comes all the way back from a 17-point deficit to beat the defending-champion Warriors and prove they belong.

Celtics top Warriors in thriller for 14th straight win
Jaylen Brown shines, scoring 22 as the Celtics erase a 17-point deficit to finish off the Warriors and keep the streak alive.

Brown finds inspiration after friend's death
Jaylen Brown remembers his high school friend who died Thursday and how he found the will to play against the Warriors.

Brown throws down two huge dunks in the first quarter
Al Horford sends a bounce pass to an open Jaylen Brown who slams down a one-handed dunk. Brown then steals the ball and hammers home an emphatic dunk to get the bench fired up.