Islanders to be sold to Jon Ledecky 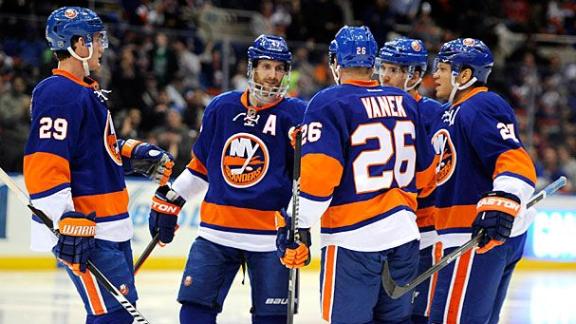 Charles Wang has an agreement in place to eventually transfer ownership of the New York Islanders to a group led by former Washington Capitals co-owner Jon Ledecky, it was announced Tuesday.

Ledecky and London-based investor Scott Malkin reached a deal to purchase a "substantial minority interest" in the team, pending league approval by the NHL board of governors, with the stipulation that the group would take over majority ownership in two years.

Wang would continue as the majority shareholder during that time.

A source told ESPN.com that the vote by the board of governors would likely happen in December.

"We are pleased to have the opportunity to become partners in the New York Islanders with Charles and to pursue our shared dream of winning a fifth Stanley Cup for the greatest fans in the NHL," Ledecky said in a statement.

"I'm thrilled that Jon and Scott have agreed to join me as we start the Islanders' final year at Nassau Veterans Memorial Coliseum," Wang said in a team-issued press release. "I look forward to a long and successful partnership."

The Islanders, who have missed the playoffs in six of the last seven seasons, have hemorrhaged money in recent years. Talk of a potential sale began in the spring, with hedge fund manager Andrew Barroway in talks to buy the team.

Those talks fell through, however, in a negotiation process that turned nasty when Wang allegedly pulled out at the last minute of an already brokered agreement. Barroway recently filed suit in Manhattan Supreme Court against Wang for reneging on the deal.

Now it appears that Ledecky and Malkin will swoop in to take over the failing franchise and its long-suffering fan base.

Ledecky will become owner of his second NHL team, having previously sold his minority ownership in the Caps to current owner Ted Leonsis in 2001.