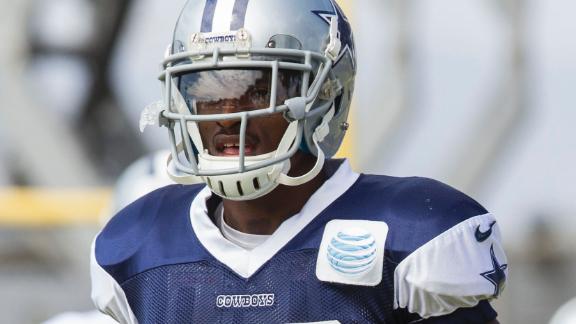 IRVING, Texas -- A second member of the Dallas Cowboys' secondary has been suspended four games by the NFL with second-year safety Jakar Hamilton being sanctioned Thursday.

As with Scandrick, the Cowboys were aware of the possible suspension of Hamilton before it was announced.

Unlike Scandrick, Hamilton is fighting for a spot on the Cowboys' 53-man roster. He missed the first preseason game because of a concussion and did not play last week against the Miami Dolphins because of a hamstring injury. He was unlikely to play Thursday night against the Denver Broncos because of the leg injury.

Before Thursday's game, Hamilton issued a statement apologizing for letting his family and teammates down.

"I thank my family for being supportive and forgiving," he said. "I also want to sincerely apologize to Mr. Jones and his family including the entire Dallas Cowboys organization. I ask my coaches and teammates to forgive me and I pray that my mistakes in life will be for others to learn from. I humbly apologize for my past actions.

"My family, fans and the people here in Texas are the greatest. I ask for your forgiveness. I don't blame any one for my shortcomings. I just thank God for another chance to come back stronger and wiser. Let this be a lesson for those who are disobedient."

With the suspensions of Hamilton and Scandrick, the Cowboys are facing a fine of close to $44,000 from the NFL.

According to league rules, when a player is suspended without pay for a violation of the personal conduct policy, policy and programs for substances of abuse or policy on anabolic steroids or related substances, the team will have to remit to the management council a portion of the players' salary that is deemed forfeited.

With a four-game suspension, this is Hamilton's second violation of the league's drug policy. According to the collective bargaining agreement, he must remain in Stage Two for 24 months or two full seasons, whichever is shorter. In Stage Two a player is subject to unannounced testing up to 10 times per month.

Another failed test could lead to a one-year suspension.

The Cowboys signed Hamilton last year as an undrafted free agent. He spent time on the practice squad but was called up to the active roster and played in three games, making three tackles. He made one tackle in his only preseason appearance of the season Aug. 16 against the Baltimore Ravens.

This week coach Jason Garrett was asked about Hamilton's chances of making the team.

"Jakar's done a really nice job," Garrett said. "Unfortunately, he has been banged up here the last couple weeks. He's a guy that really, really made great strides, both as a back-end safety, played a little bit as a nickel guy, he's improved on special teams. He has a lot of physical ability, and the big thing with him, like a lot of young guys, is simply maturing as a player. He definitely demonstrated that. But he has been out the last couple weeks. We like him a lot, and he's certainly developed quickly for us, but his injury's certainly a factor in our evaluation of him."