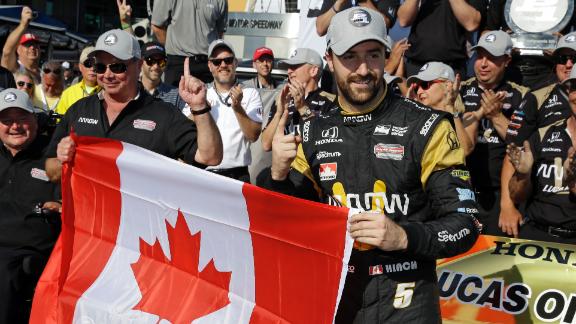 INDIANAPOLIS -- James Hinchcliffe watched the Indianapolis 500 from his hospital bed last year. He had nearly died from injuries six days earlier in a crash at famed Indianapolis Motor Speedway.

Now he'll start the historic 100th running of "The Greatest Spectacle In Racing" from the pole.

The Canadian continued his remarkable comeback Sunday by edging American Josef Newgarden for the top starting spot next Sunday. Hinchcliffe earned the pole with a four-lap average of 230.760 mph.

A day after qualifying last year, Hinchcliffe spun and hit the wall during a practice session. The impact caused a piece of his car to break and sail through his thigh. Hinchcliffe would have bled to death if not for the fast work of IndyCar's medical team, which staunched the bleeding and raced him to a nearby hospital for life-saving surgery.

"I don't think anyone can describe nearly losing your life at a track, then going back there to go 240 mph into a corner," said Ryan Hunter-Reay, one of the many drivers to congratulate Hinchcliffe after his pole-winning run Sunday.

Newgarden will start second after qualifying at 230.700, and the difference between Hinchcliffe and Newgarden was the fourth-smallest between first and second in Indy's 100-year history.

Hinchcliffe won in dramatic fashion on the final run of the nine-car pole shootout. The win came on the fifth anniversary of team owner Sam Schmidt's team winning the pole in 2011.

"Mom moved in on May 1. She didn't want to miss a lap, just in case I tried to kill myself again," Hinchcliffe said of his parents, who were on vacation when he crashed last year and IndyCar had to scramble to get them to Indianapolis while their son was in surgery.

Hunter-Reay, the 2014 winner, will start third on the outside of Row 1 after going 230.648. The runs by Hinchcliffe and Hunter-Reay, who drives for Andretti Autosport, put two Hondas on the front row in a season that so far has been dominated by Chevrolet teams. Newgarden will be sandwiched between the two Hondas in a Chevrolet fielded by Ed Carpenter Racing.

For a bit, it seemed Newgarden would win the pole. He was the only driver to turn a lap over 231 mph, and Hunter-Reay barely knocked him off before Hinchcliffe began his run.

Hinchcliffe's victory marks the first time in six races that Team Penske drivers have not won the pole. It also ends a 31-race pole drought for Honda, which dated to the 2014 race in Houston. It's also the first time Honda has claimed the Indy 500 pole since 2011, the year before Chevrolet rejoined the engine competition in IndyCars.

It will be Newgarden's first career front-row start at Indy.

Qualifying was marred by one crash. Canada's Alex Tagliani, who drives for A.J. Foyt, spun coming out of the fourth turn of his warmup lap and slammed into the attenuator at the entrance to pit road. Although his car spun five-and-a-half times, he was quickly checked, released and cleared to drive by the infield medical center.

Tagliani will start last on the traditional 33-car starting gird and will be the first starter since 1924 to start the race without an official qualifying speed.

Townsend Bell and Carlos Munoz qualified fourth and fifth to give Andretti three spots in the top five.Will Power was sixth and the highest-qualifying Penske driver.

Mikhail Aleshin and Oriol Servia qualified seventh and 10th, as Schmidt got all three of his Hondas in the top 10.

Defending race winner Juan Pablo Montoya will start 17th after a bizarre sequence in which he ran over a trash bag during his qualifying attempt. IndyCar said the debris on the track was its responsibility and let Montoya try to qualify again, but his pace was not competitive.

Scott Dixon qualified 13th and was the highest qualifying driver from Chip Ganassi Racing, as both Ganassi and Penske were overshadowed by smaller teams on Sunday.