KGO
By Wayne Freedman
KENTFIELD, Calif. (KGO) -- How ironic that while we cannot relive history, we're able to replay it on video, at least. For instance, that 2011 ACS High School Championship game when Campolindo defeated Marin Catholic.

"The better team lost," mused Chris Tewhill while staring at a computer screen.

Chris made 15 touchdown catches from Jared Goff, that season, which gives him insight about Marin County's homegrown hero and Super Bowl quarterback.

JARED GOFF: They LA Ram they love in Marin County

"I speak for everybody when we say he is an easy guy to root for," said Tewhill.

Those sentiments extend to anyone in the county who knows him.

San Marin High School coach Dominic Dimare had Goff on his team as a talented eight-year-old in peewee football.

"Talented. And very humble. Just a well-rounded young man. He leads by example."

When Goff played at Marin Catholic, his stats looked like they came from a video game. Even at 15 years old, Goff made everyone look good.

"There was a good spotlight on him for a high school kid and what made him such a good leader is he didn't blink," said Tewhill. "He's good in the locker room. No moment was too big. People gravitated toward that."

Goff was unselfish with his teammates. He grasped life beyond the game, even in that championship when, after all those great catches, Chris Tewhill dropped the perfect bomb that might have won it.
He felt terrible.

After the game, Jared Goff was the first man to comfort him.

"One of your toughest moments as a high school kid and this is your world. I think it's a microcosm for the kind of leader he is," said Tewhill. "He said, 'We'll take care of you, Chris. We've got your back.'"

They will be at the Super Bowl on Sunday. 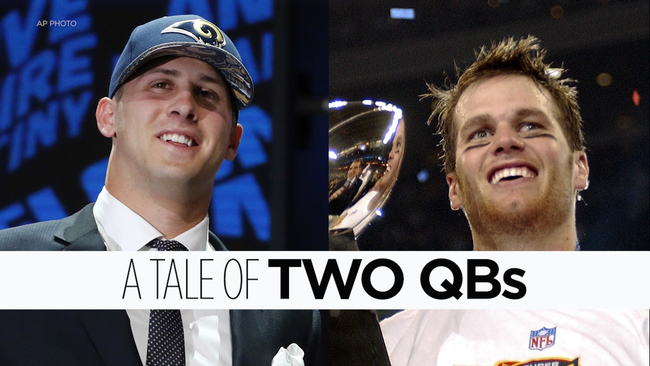