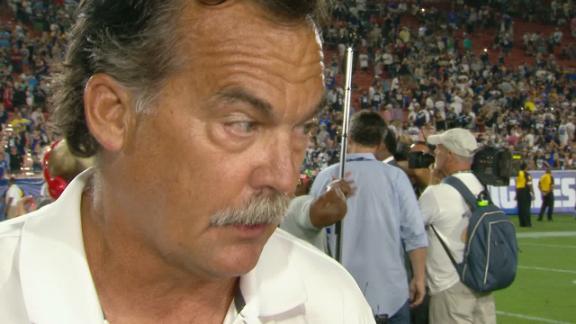 Fisher said he planned to play Goff throughout the third quarter against the Dallas Cowboys in the teams' preseason opener, but when he learned at the half that the rookie quarterback had a sore, non-throwing shoulder after taking a hit in the second quarter, Fisher decided to sit him.

"At halftime he was getting stiff, and I didn't want to mess around with it," Fisher said.

Both Fisher and Goff said the injury was not serious.

Goff, the No.1 overall pick in last April's draft, completed just 4-of-9 passes for 38 yards in the Rams'28-24 win. Two passes were dropped. He also threw an interception.

Goff was banged up when hit by Dallas linebacker Derek Akunne in his first series.

"He got hit and the ball floated," Fisher said. "He understands that."

Fisher said he expects the rookie to be able to practice this week. The Rams host the Chiefs next Saturday.

Goff did return for a second series and may have thrown his first touchdown pass if rookie receiver Pharoh Cooper had not dropped the ball.

"It would have been great, but I have a lot of football ahead of me," Goff said.

"Hopefully next week I can have a little more production."